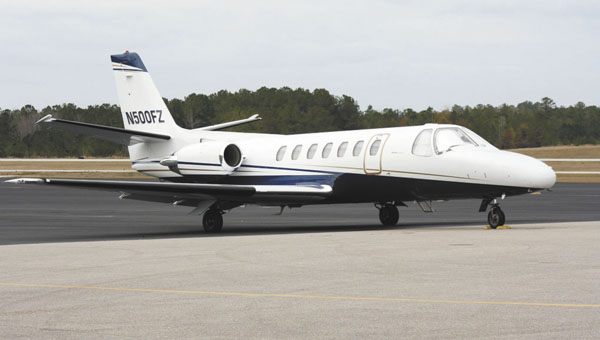 The South Alabama Regional Airport just got famous — or at least it will be when it appears on the next season of CMT’s “Sweet Home Alabama.”

Jed Blackwell, co-director of SARA, said there were seven to eight people, including cast and crew, on a 560 Cessna Citation jet airplane from Atlanta that flew into the Sanford airport Thursday. While here, the group shot scenes of the runway and contestants getting off the plane.

It was rumored that the filming spilled over into Geneva County yesterday.

In the show’s first two seasons, a bachelor searched for love among both city and country girls. In the third season, Southern bachelorette Paige Duke, a Lancaster, S.C., native and former ambassador for the NASCAR Sprint Cup Series is looking for love.

This is at least the second time the show has made its way to the area filming for the season. A few weeks ago, filming was conducted at Brooklyn’s Boggs and Boulders.

A spokesperson for CMT said she did not have any information about the next season because filming is managed by a third party production company, and the company has no public relations representative.

This season’s premiere is scheduled to air Fri., Jan. 13, on CMT at 8 p.m. CMT can be viewed locally on Andy Cable Channel 55.