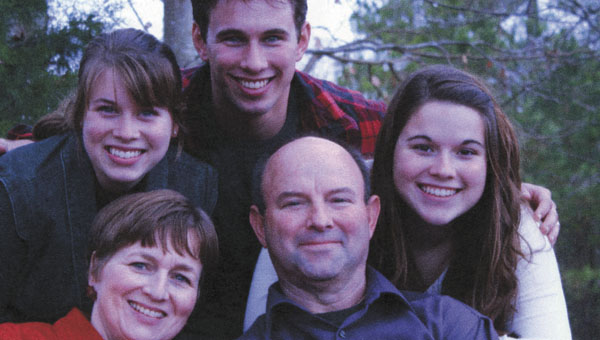 |The Holland family recently sent letters to the ARH staff thanking them for the care they received 17 years ago. Courtesy photo

Good deeds done 17 years ago recently came full circle when employees at Andalusia Regional Hospital received letters from a woman and her children thanking them for the medical and emotional care provided them.

On Dec. 4, 1994, Karen Holland, her three children – then ages 4, 3 and infant, and niece were involved in a three-vehicle accident near Red Level that injured seven and left a local man dead.

An account of the wreck published in the Dec. 6, 1994, edition of The Star-News stated that the wreck happened just as Red Level’s Christmas parade was about to begin. Then-Red Level Chief David Anderson had made a routine traffic stop on Hwy. 55. He looked up to see a vehicle cross the center line into oncoming traffic. Anderson, according to the account, yelled at the person he’d stopped to get out of the way and dived over the top of his police cruiser.

Emergency personnel lined up for the Christmas parade quickly came to help, causing confusion among bystanders to whom it appeared the parade was out of line.

“They kept going in to shock,” he said. “We were using the jaws of life to get someone out of the front of the van, and somebody had to crawl over the back seat to get to the children.”

The victims were all taken to Andalusia Regional Hospital, and most of the Holland family was transferred to the care of an orthopedic surgeon in Dothan.

But the children captured the hearts of the ER staff. One staff member went in the ambulance to care for the infant, who was not injured, but needed to be with the rest of the family. Later, Kym Ray, who was the ER clerk and is now an R.N. working in Ft. Walton, wrote to the family and had fellow staff members sign a card for them.

“Our Christmas will be touched by the memory of a loving family,” Ray wrote.

And 17 years later, their lives were again touched by the memory of this loving family.

Last week, ARH received a Christmas card from the Hollands with letters from each family member. Mrs. Holland wrote that she had come across clippings and cards from ARH just before Thanksgiving.

“I realized that my children had probably never seen or read the correspondence since they were so young when we had the accident. So we read/reread the notes and article as part of our ‘Things to Give Thanks for’ celebration. Needless to say, our children were moved to tears, literally, by what they read and wanted to write personal letters of appreciation to each of you.”

Caleb Holland, now 21, wrote that he remembers the events of 1994 only in fleeting glimpses.

“We are a testimony to the fact that people like you exist, people who would rescue and help total strangers in really rough situations. We are thankful for y’all.”

Lydia Holland, now 20, wrote, “You saved our lives, you influenced us for good, and I’m so excited for the day when we get to see all the little divine appointments that came because of the care and love given so many years ago by your staff. We were ‘just another family,’ but we are so much more than that. You are so much more than ‘just another hospital.’ … We are forever grateful.”

Priscilla Holland, who was an infant and the only member of the family who was not injured, wrote, “You prayed for us and took care of me when my family couldn’t. You all stayed by our sides to make sure we were going to be OK. … Thank you for spending time with us. We are forever grateful. My family and I are living proof that miracles DO happen.”

Mrs. Holland also told the staff members that the events had touched her family in another way.

“My youngest sister was so inspired by the Rescue Squad’s help that she became a volunteer firefighter/paramedic in the rural county were my parents live and, in the process, met her husband who is a firefighter/EMT. It’s very obvious that what you and the Rescue Squad do affect more people than just the people you ‘rescue’ and treat medically!”

ARH community relations director Patty Ashworth said many who were a part of that night’s events still work in the hospital. The letters, she said, brought tears and memories.

“It was so good for all of them to realize they do make a difference, every day,” she said.

Habitat won’t be ready for Christmas