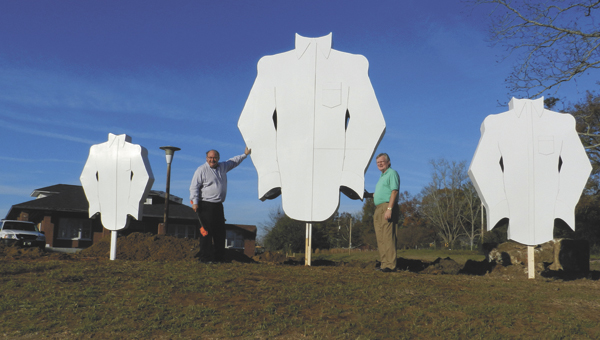 When the City of Andalusia purchased what is known as the Alatex property for a light industrial park, Mayor Earl Johnson announced plans to build a national monument to textile and apparel workers on the property.

Wednesday, local residents got a sneak peek at what that monument might look like, when city workers erected three very large white shirts on the property.

Mayor Earl Johnson explained that the shirts are mock-ups of what will eventually be a large metal shirt, painted white.

“We’re going to be able to change the ties with the season,” he said. “It will keep people driving by to see what tie is on display this week.

“We were the white dress shirt capital of the world,” he said.

City employees built the shirts on display this week to help determine how large the eventual statue should be. Johnson is voting for one shirt that will be 30 percent larger than the largest one currently on display, or approximately 11 feet wide. Landscape architect Dale Fritz of Dale Fritz and Associates, wants three shirts. Wednesday afternoon, the jury was still out.

Johnson said the goal is to dedicate the monument to textile workers on Labor Day 2012.

Between now and then, there will be an opportunity for people who worked here, or whose parents or grandparents worked here, to have their names inscribed on some kind of monument, he said. There also will be a monument about the late John G. Scherf and his contributions to Andalusia.

Already, the building that was once Alatex’s corporate office is undergoing renovations to become the chamber of commerce office and a welcome center. Memorabilia from the Alatex era will be displayed inside.

Fritz encouraged anyone who has photographs, old equipment or other items related to Alatex that they might be willing to donate or loan to the visitors’ center to call city hall.

Fritz previously worked with the City of Andalusia to design the court square, the gateway, the grounds of city hall, veterans park and Robert Horry Park.