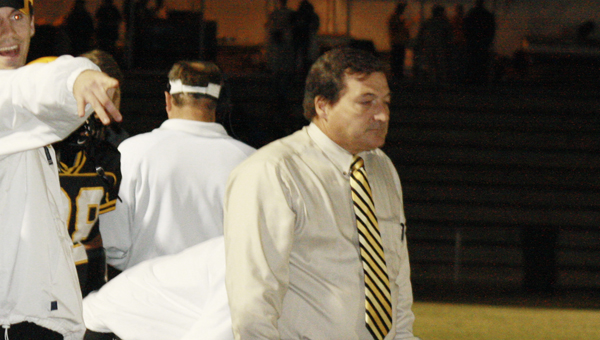 Opp head football coach Jack Whigham is this year’s Coach of the Year.

Whigham said being selected as the Coach of the Year is a great honor.

“I’m very honored and very appreciative,” Whigham said. “It’s a testament to my coaches and my players. It’s nothing I’ve done.”

One of the most memorable moments Whigham said he’ll cherish, took place during the Abbeville game, which sealed the region championship for the Bobcats.

“In that game, we had to knock out a first down to secure it (the region championship),” he said. “(Abbeville) was so dangerous and fast. The kids convinced me to go for the first down — I was going to punt the ball, to be honest.

“They told me they could go out and do it,” he said. “It was a relief getting that first down and winning the region title. That was really memorable for our kids.”

Yet, when it comes to his players, Whigham said there’s not a group that will work harder on the field, whether at games or a practices.

“Our kids will work,” he said. “Regardless of sometimes what kind of mood they may be in. When it’s time to work, they know how to work.

“That’s what’s really rewarding to me,” he said.

Additionally, Whigham said what sets his players apart is some of the feedback he gets from teachers and the community.

“They will come by and talk about how our kids were in the classroom helping kids that are less fortunate — and how mature our kids are to help the other kids,” he said. “That’s a testament that our kids know there’s a lot more to life than just football.”