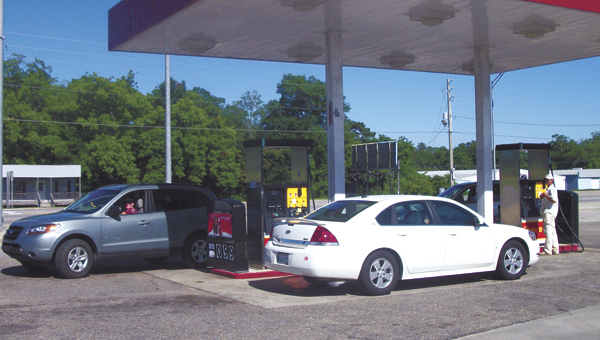 Local residents might have a little more jingle in their pockets to spend on Christmas, as gas prices are down slightly this week at an average of $3.13 per gallon.

Gas prices are down 30 cents locally from six months ago, but still higher than this time last year.

Locally, Andalusia’s average is $3.13 per gallon, with the cheapest gas found at Cannon Oil and Murphy USA at $3.06 per gallon.

Opp’s average is $3.14 per gallon, down from last week. The cheapest gas was found at the Road Runner BP on Hwy. 84 and the Cummings Ave. Tom Thumb at $3.07 per gallon.

Florala’s average is higher than last week by a penny at $3.20 per gallon.

In North Alabama, places like Fort Payne are reporting gas a little as $2.99 a gallon. The state average is $3.09 per gallon.

However, Clay Ingram, AAA spokesperson said gas prices may drop a little bit more during December, but not much.

“There is a good chance for prices to drop some during January and February, as that is the normal trend,” he said. “But until the end of the year, I don’t think we’ll see much of a drop in prices.”

Still, the small decrease could be good news as the Labor Department said the consumer price index stayed flat last month, namely due to dropping gas prices, which in turn could bolster retail sales this holiday season.

This year, gas prices are down on average 70 to 80 cents from their peak, and those pennies are translating into a billion dollars, according to national economists.

Sageworks, Inc., a financial information company recently said that sales for private retailers have been increasing between 5 and 6 percent this year.

It is expected that those sales will continue to increase if consumers spend the cash they are saving on gas.

Nationally, New Mexico has the lowest gas prices at $2.90 a gallon, and Alaska has the highest at $4 per gallon.