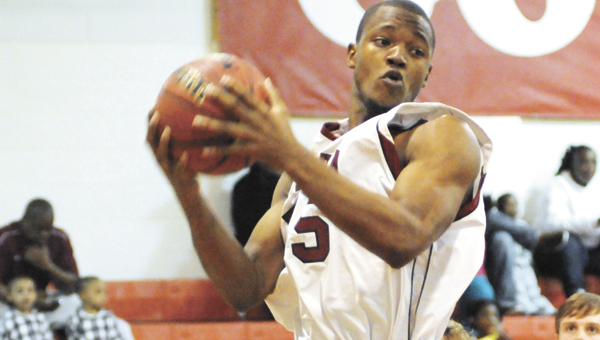 Andalusia’s Jacard Townsend had a double-double Saturday night against the Raiders. | Andrew Garner/Star-News

Andalusia’s Jacard Townsend had a double-double to help lead the Bulldogs to a 60-42 win over Houston Academy on Saturday night.

Townsend had 30 points and 13 rebounds, and added four steals on the night against the Raiders.

With this victory, the Bulldogs improve to 9-6 overall. AHS will play next in the Ozark Hoop Classic on Dec. 28 at 8:30 p.m. against Luverne.

The Bulldogs stuck to a man-to-man look in the first half to hold the Raiders to four points in the first period and 14 in the second period to take a 25-18 lead at half time.

Townsend put the game to 7-0 in the first period on a 3-point play from the free-throw line.

Houston Academy got on board in the first at the 2:20 mark on a drive to the paint by Christopher Johnson.

Then, the Raiders hit a jumper from Aaron Jordan to trail 8-4 with 1:15 in the first.

Townsend scored 20 of his points in the first half, where he had help from guards Joe Flowers, Lakelyus “Fathead” Adams and Jalen Cross on passes.

Flowers chipped in 11 points, and Adams had 10 points for the Bulldogs.

Houston Academy kept the game close at the start of the second half when Richard Howell nailed a 3-pointer and a jumper to go to cut the lead to 25-23 with six minutes left in the third period.

“That bunch over there knows the game,” AHS head boys basketball coach Richard Robertson said about the Raiders. “We’re still sluggish. Playing after a loss, it’s hard to be energetic and not be depressed. Winning is a cure-all.”

Townend answered with a 3-point play that started an 18-0 run by the Bulldogs, who stepped up the pressure on defense to get steals for easy transition.

In the 18-0 run, Adams hit two 3-pointers, Flowers got a jumper and a 3-pointer and Townsend hit a lay up on a pass from Niguel Jones.

The Raiders added two points on a pass from Ryan Brown to James Medley to trail 43-27 at the end of the third period.

Andalusia then went on a 9-0 run in the fourth period to put the game out of reach for the Raiders, taking a 52-27 lead late.

Most of the Lady Bulldogs’ bench got to see many minutes on the court on Saturday night.

The Lady Bulldogs (10-2) had a 41-19 lead at half time, and AHS head girls coach Bennie Shellhouse sent in his seconds and beyond in the game a few minutes into the third period.

By the end of the third period, the Lady Bulldogs led 53-24, where the Lady Raiders didn’t have an answer to the pressure.

The Lady Bulldogs will play next in the 14th annual Red Level Invitational Christmas Tournament today, where they will face Elba at 3 p.m.

Andalusia’s Jacard Townsend (55) gets fouled by Hillcrest-Evergreen’s Barron Smith (10) Friday night during the Bulldog’s 60-56 loss to the... read more