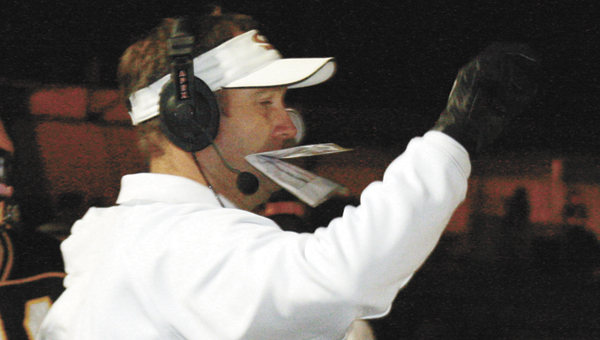 OHS defensive coordinator Michael Cassady was selected as the assistant coach of the year in Class 3A for 2011 by the AFLCA. | Stephanie Nelson/Star-News

Opp assistant football coach and defensive coordinator Michael Cassady was selected as the 2011 Class 3A assistant coach of the year by the Alabama Football Coaches Association.

“First, I’d like to say that I’m very honored on receiving it,” Cassady said. “The awards are great, but reason I got this is for the players and the kids — the reason why we all, as coaches should remember why we’re out there — for the players.

“You don’t win awards unless you have good players in front of you,” he said. “They were a big contribution to this, along with the assistant coaches and head coach we have.”

Cassady said a big reason why he thinks he was selected for such an honor would be what his players on defense did on the field this season.

In the game against Elba, the Bobcats led 14-0 at half time and gave up only one first down in the first half, Cassady said.

“Some of it had to do with that,” he said. “Playing Andalusia, who was 10-0 in the regular season and holding them to 21 points. Coach (Brian) Seymore does a great job with his kids. They looked at that, and what we did week in and week out.

“We just had a really good game plan, and that’s what they saw,” he said.

Cassady’s tireless work ethic and the amount of time he invested in Opp’s defense were the main reasons why Bobcats’ head football coach Jack Whigham nominated him.

“When they (Alabama Football Coaches Association) first stated, one of the things they wanted to do was give assistant coaches the chance to be recognized,” Whigham said. “He had our defense playing hard every Friday night.”

Cassady has been an assistant at OHS for 14 years, and the defensive coordinator for the last six years.

Cassady said when it comes down to it, the players played the biggest part in receiving the honor.

“All of that comes back to the kids, who bought into our program and what we were trying to do defensively,” Cassady said.

He will be honored at the ALFCA’s convention Jan. 28, in Montgomery.