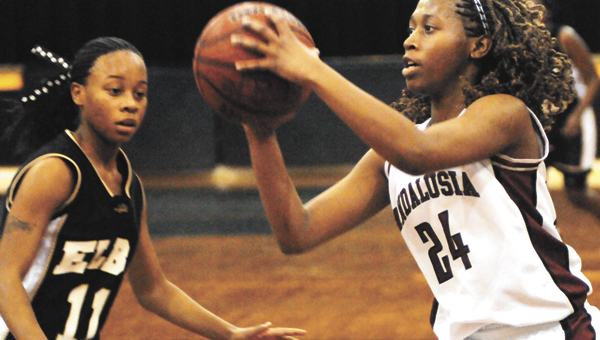 Andalusia senior guard Alexis Horton scored a game-high 38 points to help lead the Lady Bulldogs to a 74-34 rout over Elba on Tuesday.

Horton scored many of her points with the help of well-executed passes from Alison Daniels and Alectricia Barnes. Daniels finished with six assists, the same as Horton for the game.

Shi’Amber Townsend almost had a double-double for the Lady Bulldogs, but finished with 21 points and nine rebounds.

“I thought we played well,” AHS head girls basketball coach Bennie Shellhouse said. “(Horton) got a lot of assists from other people, too. Shi’Amber and Alison did a great job on the boards for us.”

AHS led 68-32 at the end of the third period, and went on to outscore the Lady Tigers 6-2 in the fourth period.

Additionally, Daniels finished with 10 rebounds for the Lady Bulldogs.

“As long as everybody is contributing, then I feel like we’ll be competitive,” Shellhouse said.

Andalusia will play rival Straughn at 3 p.m. tomorrow in the tournament semifinals.