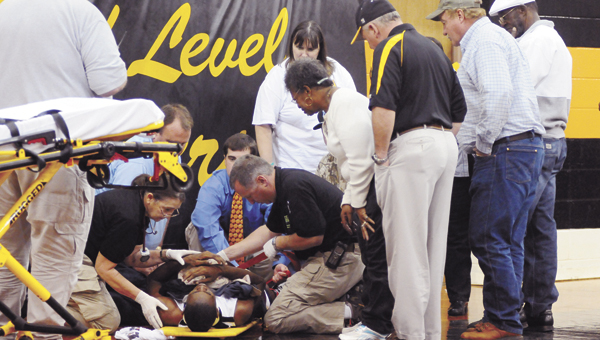 Coaches, relatives, paramedics and school officials crowd around James Feagin Tuesday night after his injury. Feagin is shown being strapped onto a flat plat form that is strapped to the gurney. | Andrew Garner/Star-News

There was only one thing on the minds of Red Level’s varsity boys basketball team last night when the final buzzer sounded — fellow teammate James Feagin.

With two minutes to go in the third period, Feagin went up for a block on transition against St. Luke’s, fell over a player and landed on his head and neck.

Coaches, relatives and those who offered help crowded around Feagin under the basketball goal.

Within a few minutes of the accident, Feagin was moving his arms and legs as the crowd waited for paramedics to arrive.

At around 8:42, Feagin was wheeled out of the gym and an ambulance from Advanced EMS took him to Andalusia Regional Hospital.

“The last 10 minutes were the longest 10 minutes of a basketball game I’ve ever been through,” Feagin’s coach, Allen Catrett said. “We’re like a family here. When one goes down, that’s what you worry about.”

RLS led 12-4 after the first period and after a Feagin put back, the Tigers led 28-7 at half time.

Feagin had 10 points, eight rebounds for the Tigers on Tuesday night.

When asked if this was the first time he’s dealt with a situation such as this, Catrett said it was his first.

“I’ve had players hurt before,” he said. “But, not like that.

“We were ready to go ahead and get it over with to get to the hospital.”

As Feagin was wheeled out of the gym, he gave a wave to the fans in attendance to let them know that everything is going to be OK.

The Star-News didn’t have any more information on Feagin’s injury when the newspaper went to press on Tuesday night.