Area ministers: Jesus is the reason for season 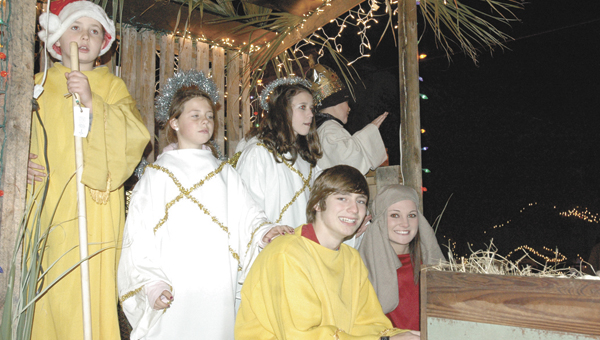 Florala children play the part of the nativity in the annual Christmas parade. | File photo

Local ministers emphasize that the true meaning of Christmas is not about the presents under the tree, it’s about the greatest gift of all – God’s gift of his son to save the world.

“Christmas is a reminder of God’s gift to mankind — Jesus,” he said. “God’s gift of His son Jesus is an expression of His love for you.

“It can be so easy to lose the real meaning of Christmas in our culture, where it seems like we’ve been hearing carols playing in stores since before Halloween,” she said. “Of course, most people know that Christmas isn’t about the gifts or the parties or the decorations, even though we seem to spend so much of our time, attention and money on those things.

“For me, it is important to remember that Christmas is the Feast of the Incarnation, a celebration of God taking human form – flesh – and entering history in the form of a vulnerable baby. The incarnation is what sets Christianity apart from other faith traditions. God became like us to bring us back to Him and to show us what it means to be truly human.”

The Rev. Dale Sallans, minister at Andalusia’s First Presbyterian, said he is reminded this season, as he is every season, that Christ came and will come again.

“As we celebrate his first coming, we must think to his second coming,” he said. “We shouldn’t worry with when he is returning, but be sure we are ready when he does make his return.”

The Rev. Willie Denson of St. Paul’s AME church agreed that the season is all about Jesus Christ and the love of God.

“Jesus came to save us from our sins,” he said. “He came to be our peace offering.”

Denson likened God sending Jesus like a peace offering between friends who have been at odds with each other.

“Before he came, man was at war with God,” he said. “God offered Jesus as a peace offering, just as you would someone you are fighting with.”

The Rev. Calvin Feagin, of River Falls’ First Bethlehem Church said said “Christmas is a time to be grateful and remember the gift God gave us so many years ago. He cared enough to give his son for our salvation.”

“St. John 3:16, says ‘For God so loved the world that he gave his only begotten son.’ That is the greatest gift ever given.”