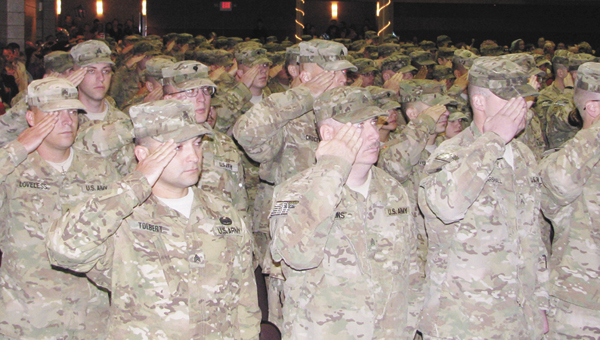 While the gift wasn’t wrapped or found under the tree, it truly was the greatest present the Jacksons could have ever received – Sgt. Chris Jackson, home safe from war.

Jackson, a member of the National Guard’s 1165th Military Police Co., headquartered in Fairhope, was among the group of soldiers who returned home Friday from a deployment to Afghanistan.

It was his second – and last – deployment, said his wife, Charla, from the couple’s Rockhole Bridge home. He was deployed for 15 months in 2006 and 2007 to Iraq.

“Him being gone has been extremely hard,” she said. “As a military wife, you stand silent in the ranks. It’s hard, running a household by yourself, but that’s over now. He’s home.”

As one would imagine being attached to a military police unit, Jackson and his comrades were “in the thick of things.”

“Their job was to do security details such as escorting higher up military personnel or whatever is needed,” Charla said. “He was part of a quick response team, which meant when things got bad, they got called out to take care of the situation.”

One such detail was the August British Council bombing in Kabul.

According to military records, Jackson helped defeat a multi-phased attack in which insurgents used small-arms and improvised explosive devices to attack the council building, a base located in a relatively upscale area of the country’s capital used for education and helping Afghanistan’s civil society groups. Although no U.S. service members were harmed, 12 people died in the attack.

Jackson was one of 10 soldiers presented with Joint Service Achievement Medals and combat action badges for his part.

The couple has a 19-year-old daughter, Patricia Hughes, and an 8-year-old son, Tyler, who is in Mrs. Stephanie Nall’s third grade at Andalusia Elementary School. He had an especially hard time dealing with his dad’s deployment.

“The first time Chris was deployed Tyler was only 3,” Charla said. “This time, Tyler understood more. We told him that Daddy was going to war and fighting bad guys. He’d see things on the news and got worried several times, but that’s all behind us now. He gets his daddy home for Christmas.”

Sgt. Jackson, who spoke by phone Tuesday, said, “Words can’t describe what I’m feeling right now. I’m getting choked up right now. It’s really amazing that I can wake up Christmas morning and see my wife and son – their faces.

“There were a few times over there that things got hairy,” he said. “Shots going off; sniper fire, but it’s worth it to protect our country.”

Today is the first day Jackson will wake up in his own bed, enjoy his own shower and play with his dogs – Bo and Diesel – all things that topped his must-do-first list.

A Shaw employee, he is expected to return to work after a three-month transition.

“Right now, we’re going to concentrate on enjoying the season and spending time with each other,” he said. “I can’t wait.”

A community Christmas dinner is planned from 11 a.m. until 1 p.m. at St. Mary’s Episcopal Church located on East... read more