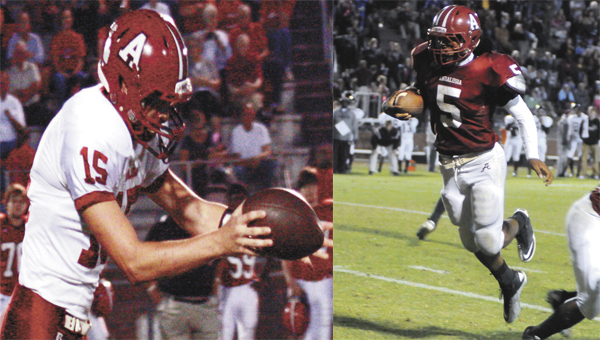 As seniors for the Bulldogs, Townsend and Rogers helped lead AHS to a regular season perfect record — the first since the 1977 season — and a berth in the state playoffs, where they lost to Elmore County in the first round.

“It’s pretty cool,” Rogers said about the accomplishment. “I didn’t get a chance to punt a whole lot, but it’s pretty cool. It really didn’t occur to me that I’d make it as the All-State punter.”

When Rogers wasn’t punting for AHS, he had the helm of the offense at quarterback, a position he had been aspiring to play since he was a child.

At the quarterback spot, Rogers had 871 yards and six touchdowns on the ground, and threw for 346 yards and four touchdowns in the air.

On the linebackers spot, Townsend racked up 65 total tackles, 14 sacks, three caused fumbles and one interception this season.

Townsend was a part of an AHS defense that only allowed an average of 9.8 points per game in the regular season.

“I didn’t even know I was going to be on the team,” Townsend said. “I was shocked.”

When asked what it was like to play at Andalusia, both said it was a rewarding experience.

“It was pretty cool,” Rogers said. “I always wanted to be quarterback since I was a little kid, and I finally got a chance and I did pretty well.”

“It was fun,” Townsend said.

In Class 1A, Pleasant Home’s Austin Chesser was nominated as an honorable mention on the offensive line.

JCPenney associate Breanna Mayhall was working diligently Monday to restock all the returned holiday gifts. The mounds of items on... read more