Less than half of taxes collected 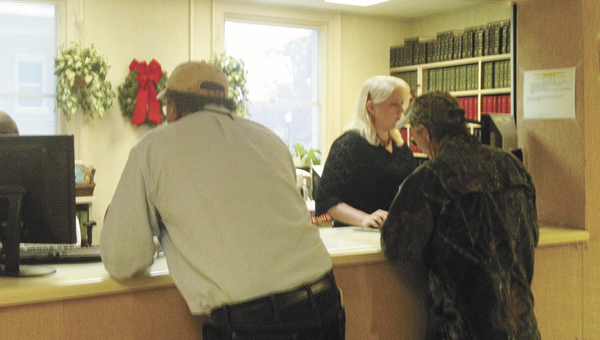 Residents wait at the counter to pay their property taxes recently. | File photo

With only three days remaining before penalties are charged on outstanding property tax notices, less than half of the $11 million billed in October has been collected.

“That leaves $5.9 million left unpaid,” Thompkins said. “We got off to a great start this year, but (collections) have slowed down to a trickle. It’s quite surprising we’re so far away from the total.”

Thompkins said the majority of mortgage companies who collected ad valorem taxes have remitted those dollars to the revenue commissioner; however, there are a few large local companies that have yet to pay their property taxes.

“When those come in, it will go a long way to closing the gap we have,” she said.

Thompkins said for those wishing to mail in their payments who want to avoid a late fees. The checks must be postmarked by the last day of the year. She said mounds of payments are expected to arrive in the mail in the coming days.

“Also, we’re not charging a late fee on mobile homes, which were due at the beginning of the month, but one will be added if it’s not paid by Jan. 1,” she said.

Thompkins said those who may have purchased a new home prior to Oct. 1 should also apply for homestead exemption before the end of the year.

“If it’s your primary residence, then by all means come in and apply for the exemption,” she said. “It can make a difference in the amount owed.”

If one qualifies, one must pay 10 percent the assessed value of the property.

Taxpayers have two options in which to pay – they can either come to the courthouse or they return the payment through the mail.

The revenue commissioner’s office is open Monday through Friday from 8 a.m. until 5 p.m. When paying by mail, send the bill or bills and payment to “Revenue Commissioner, 1 North Court Square, Suite G, Andalusia, AL 36420.”

Residents should also bring their bills to the courthouse, in order to expedite the process.

Property taxes are distributed to the school systems, the county’s general fund and road/bridge fund, among other areas.