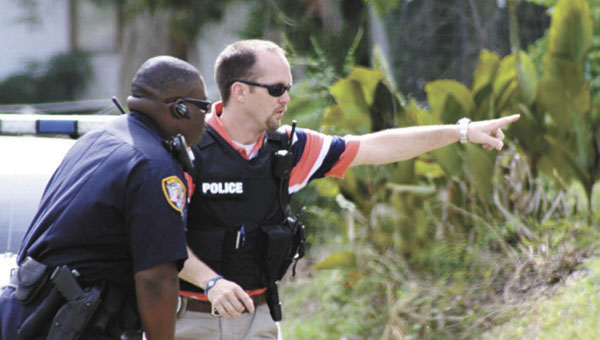 FIRST IN A SERIES

This was the year that Covington County was introduced to a convicted murderer, who claimed he had talking cat, a fallen angel, a ninja burglar, two public figures who were arrested for using their position to facilitate a crime, and possibly, the worst best friend a girl could have.

The most publicized arrest of the year was that of AMS teacher Amy Caudle, whose actions were described by Judge Trippy McGuire as “disgusting and depraved.”

Caudle, a special education teacher at AMS, is now serving a split 15-year sentence – three years in jail and 12 years on probation – after pleading guilty in June to two counts of sodomy for performing oral sex on two different victims. Each incident was in her vehicle at the time.

And secondly, a former candidate for sheriff was arrested in April for allegedly obtaining criminal history information illegally and using his office for personal gain while he served as the Lockhart Police chief last year.

John Davis II is now awaiting trial on three counts of obtaining criminal offender record information under false pretenses, violating the state’s ethics law and using his official position or office for personal gain. The case was investigated by the Alabama Criminal Justice Information System (ACJIS), the agency responsible for collecting, storing, retrieving, analyzing and disseminating criminal justice data on the behalf of the State of Alabama.

It remains unknown when Davis will head to trial.

There was only one shooting death in the county this year. In August, Carlton Hunter Brooks, 19, of Kinston, and Marquez Deundra Hinton, 21, of Opp, were each charged with capital murder in the death of Michael Jermaine Mount, 27, of Opp.

Less than two weeks ago, the grand jury “no billed” the charges against the men, after testimony showed their actions were in self-defense.

This year, two men were sentenced to life in prison for murdering their wives.

The first, Harold Elton Todd, told of seeing UFOs, possessing a “cigarette smoking, whiskey drinking levitating cat” and having the ability to “teleport,” as a defense in the 2008 shooting death of his common-law wife, Veronica Elizabeth Martinez.

Jurors didn’t buy it, and he was convicted in September.

The second was Bobby Wayne Copeland, who was convicted earlier this month and sentenced to 85 years in prison Monday for the 2009 shooting death of his wife, Dorothy.

In August, the “ninja burglar,” who was later identified as 33-year-old Lester Dorrell Thomasson Jr. was arrested after he dropped down through a ceiling and took pocketsful of synthetic marijuana from an Andalusia convenience store.

And just this month, a Florida teen, who claimed to “work for Jesus” and that he was “dropped down from Heaven,” was jailed Wednesday after allegedly crashing his truck, leaving the scene of an accident and driving while under the influence of a controlled substance. He was later identified as Slater Glen Allen Cole, 18, of Mary Esther, Fla.

And lastly, Jennifer Marie Messick, 31, was arrested on eight felony counts of credit card fraud and theft after she allegedly stole her best friend’s debit card and racked up more than $400 in illegal purchases – all while the friend was in the hospital having surgery.

Local law enforcement also had multiple opportunities to put their specialized training to use, including the response to a suspicious person at Opp Elementary School in March and a three-hour standoff where the man fired at officers in Andalusia.

There were no charges filed against an Opp man whose alleged threats toward an Opp City Schools employee placed the schools on lockdown. Around 10 a.m. that Monday, OPD received a call from OES reporting that Christopher Kip Jacobs, 41, was en route to the school armed with a gun and was planning on confronting a family member. For safety precautions, police and school officials locked down all three schools within the city.

One month later, John Paul Williams, 45, was threatening to kill himself when the Incident Response Team responded to his Arnold Street home. When the IRT fired shots of tear gas, Williams retaliated by firing shots back at the officers. A short time later, he was taken into custody and was subsequently charged with four counts of attempted murder, one count of making a terrorist threat and one count of domestic violence.

The men’s ministry at First Baptist Church Opp will hold a Soup for All Seasons event this Saturday during lunch.... read more