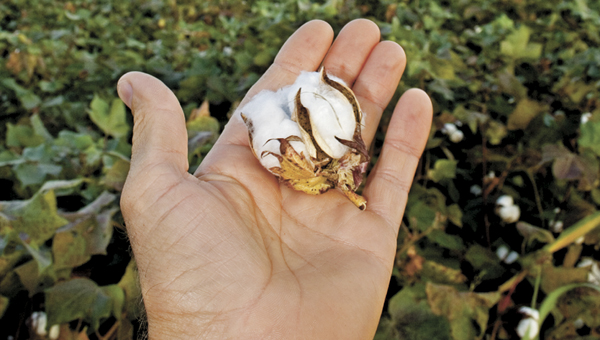 For agriculture, 2011 brought about an increased demand for cotton, an immigration law that sent some migrant workers running and a drought that dried up crops, placings farmers in dire straits with little to no hay.

In January, Doyle Barnes of the Farm Service Agency said he expected cotton prices to continue to increase. At the close of day that week, contract cotton for March sold for $1.41 per pound, which was triple, the 2008 price.

Barnes said Wednesday Covington County produced more than 14,000 acres of upland cotton, which is typically grown in the South from Virginia to Texas.

The cotton surge is part of a broad-based commodities rally since the beginning of the year, underpinned by fears of a weakening dollar, healthy demand from emerging markets and various weather-related supply disruptions.

The weather continued to plague farmers through much of the year.

In June, county farmers were sweating because the drought was taking a heavy toll on hay and crop production.

Barnes called it an “awful situation” for the farmers and the county’s nearly 30,000 acres of pasture in the county.

Without rain, hay crops were virtually non-existent and farmers were beginning to use the much-needed stockpiled hay for winter to feed their cows.

“If we run out of hay that we produce this year, there’s not a lot to be purchased,” he said. “We’ve never been in that situation. We try to plant as much winter grass as we can, but we don’t typically do that until December.”

Earlier in the month, Bentley placed all 67 counties under an emergency drought declaration.

Chuck Simon, county extension agent, said then several crops had been hit by the drought.

“Mostly, though, it was the corn crop,” he said. “One farmer said with his cotton, he won’t know (how it was affected) until he picks it in the fall. Peanuts look all right, but not so much for hay.”

“It was a little spotty, from what I have been hearing,” he said. “But we’ve had an especially good production in the South end of the county, but with less in the Red Level area.”

Barnes said the last quarter of the year proved to be better for famers.

“They only managed to miss one cutting of hay,” he said. “That put us off by one cutting for 25 to 33 percent off the normal.”

Rains in the last month or two have allowed farmers to plant their fall crops and get their winter grazing in, he said.

“We’re in a lot better shape,” he said. “We need some rain to fill up our ponds.”

On the down side, cotton prices have dropped to 72 cents per pound, he said.

“But hopefully, our farmers were able to sell their cotton at the top prices,” he said.

2011 also brought about what has been deemed the most stringent immigrant reform law in the country. As a result, statewide farmers saw migrant workers flee.

McMillan said in August that he didn’t think residents of urban areas of Alabama understood the impact of the state’s new immigration law.

“I understand the complexity of this issue,” he said. “But if you eat any fruits, vegetables or chicken, you can bet your life it has been touched by a migrant worker at some level.”

Alabama growers of produce, peanuts, cotton, poultry and sweet potatoes all depend on migrant labor, he said.

The new law makes it a crime for illegal immigrants to work or solicit work and penalizes those who hire them.

Locally, farmers didn’t report a mass exodus of migrant worker leaving their farms. However, it was a topic of great concern to local growers when they met with McMillan in the late summer.

If winter heating costs are putting too much of a strain on the household budget, two area organizations will soon... read more