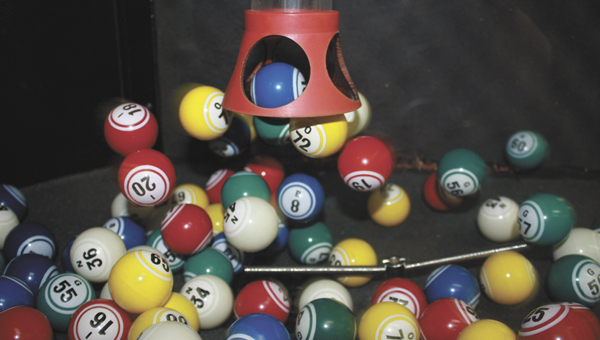 The American Legion will resume bingo nights next week with new equipment.

There is a new bingo machine inside the American Legion Post No. 80, and new games will begin on Tuesday.

The new machine, which was installed earlier this week, got its test run on Thursday by members of the Post’s bingo committee. “The old machine was out of date, and we couldn’t put the different type of pattern games on it.

“The whole process was slow, and we’re hoping with this new machine, we’ll see attendance pick up,” he said.

Games had been suspended through December for the Christmas holidays and to accommodate the installation of the new computerized machine. Edgar said instead of “bingo watchers” on the floor who worked to confirm “bingo,” now, each paper card is assigned a number. If someone bingos, the new computer will read that number to determine if the numbers match.

For the American Legion and its Ladies Auxiliary, bingo games are a means with which to fund scholarships, send students to Girls and Boys State, help needy veterans and support other charitable causes.

Games are the traditional paper-and-dauber kind, which are played on Tuesday and Friday nights. In 2011, more than $20,000 was distributed by the Post, Edgar said.

“But we really need more people to come out and support us,” he said. “When attendance is down, revenue is down and without that, we can’t help our youth and our vets.”

To help increase interest in the game, Edgar and other committee members are revising their schedule and the types and number of games played.

Edgar said the doors will open on Tuesdays and Fridays at 4 p.m., with a new early bird games at 4:30 p.m. Regular games will continue to begin at 6 p.m. There is no smoking allowed inside the building. A pack of cards, which is approximately 15 games, is $10.

“We hope it will kick back up to the level it was at three or four years ago,” Edgar said of participation. “It’s a very inexpensive way to have a good time, and help others in the process.”

Edgar said jackpots range from $50 upwards to $500 depending on the game.

Games end nightly at approximately 9:30 p.m., and concessions are available.