‘Bama gets another chance 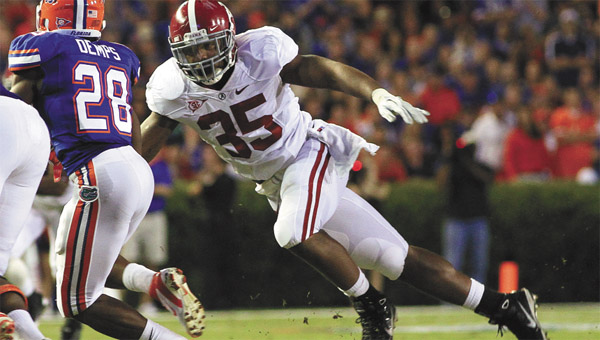 Andalusia native Nico Johnson will play in his second National Champsionship game in his three-year college career. Bama gets another shot at defeating LSU, and winning the nation’s title.

For the second time in his three-year college football career, Alabama junior linebacker and Andalusia native Nico Johnson will step on the field to try and help lead the Crimson Tide to another national championship.

Second-ranked Alabama will face No. 1 Louisiana State University in a re-match from Nov. 5, on Mon., Jan. 9, in the All-State BCS National Championship Game at the Mercedez-Benz Superdome in New Orleans.

Johnson said the team is “fortunate” to have the opportunity to play LSU again this season, especially after the 9-6 overtime loss to the Tigers in November.

“We’re working hard now and trying to correct all of the mistakes we had the first time,” Johnson said. “We’re trying to find that 60-minute, complete game.”

When asked what the team learned from the first match up against LSU, Johnson said that every play is important.

“Every play has a life of its own,” he said. “You have to go out and play your hardest on that one play because you never know what play can beat you.

“It’s like the first game, we never know what play can beat us,” he said. “I think our mind set now is to go out and play every play the best we can and execute well.”

In 2010, the Crimson Tide entered the BCS title game against Texas as the favorite. Alabama went on to beat the Longhorns 37-21 to claim its 13th national championship title.

“Now, it’s like everybody’s doubting us, and they don’t think we can win it,” he said. “We’ve got a chip on our shoulder even more now because we’re kind of the under dog in this game.”

The last time Alabama played in any sort of championship game ranked No. 2 was in the 2009 SEC Championship game against No. 1 Florida, which the Tide went on to win 32-13.

Johnson said its pretty similar in the lead-up to the game against LSU as it was against the Gators.

The Crimson Tide got back to practice early last week, and focused on their opponent late in the week, Johnson said.

The team will depart for New Orleans tomorrow.

The environment on the team right now is such that the Crimson Tide is focusing on the little things and not so much on the game, Johnson said.

“Just thinking about the game can drain you out a lot,” he said. “We got beat the first time, and we’re ready mentally and physically. We’ve got so much time off, it’s crazy and we’re just focusing on the little things.”

“It just kind of comes natural now,” Johnson said. “We have so many veterans that we know what we want and know what we’re playing for.

“It’s the thing we’ve got to do — to win a national championship,” he said. “It’s something we have to do.”

It’s not every day you will find an athlete from Andalusia that will compete in two BCS National Championship football... read more