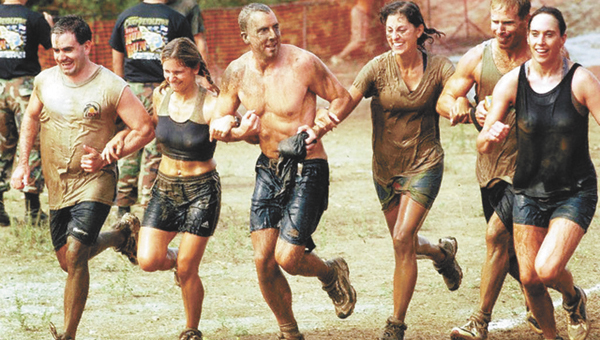 Shown are participants from one of Sqwish Sqwash’s previous challenges.

Think you have what it takes to be one of the toughest around?

The owners at Boggs and Boulders say “prove” it.

The company, has teamed up with Sqwish Sqwash Challenge to put on the “roughest, toughest, most extreme athletic challenge you’ll ever endure.”

In a course designed by Navy Seals, participants will have the opportunity to take part in three different events.

“In the Seal Tough Challenge, participants will have the opportunity to swim across the lake, jump over signs, climb under barbed wire and run through a cave,” said Ashley Holland, of Boggs and Boulders.

Holland said this is the first time Boggs and Boulders has ever held a challenge.

Holland said they are expecting a “big crowd.”

“We’re expecting at least 500 people as far as participants go,” she said. “We still have about 30 campsites available and some rooms available.”

Holland said those interested in signing up for the challenge can do so through the Boggs and Boulders Website or by coming to the park.

“We’ll offer a special rate for those who come to the park,” she said. “And the sooner you sign up the less it will cost you.”

In addition to the cost for the event, Holland said there is a $5 fee for each challenger to enter the park and $10 for each spectator.

“We do accept cash, credit cards or checks,” she said.

Holland said anyone under the age of 19 is required to have a waiver signed by a parent to enter the challenge.

“We’d also like for people to know that our park will still be open for our four-wheeler customers, but there will be limited trails,” she said.

For more information, call 251-578-4333 or visit their website at boggsandboulders.com.

Stories that touched us

It was the year of fiscal showdowns in Washington, and Occupy Wall Street demonstrations across the country. It was the... read more