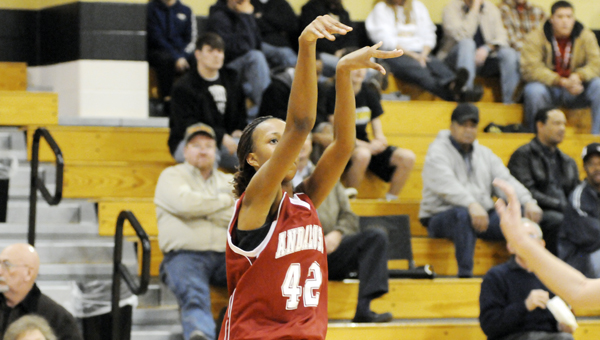 Andalusia’s amped up its defensive pressure in the second half as the Lady Bulldogs went on to outscore Straughn 21-2 in a 32-19 area win Tuesday night.

“We couldn’t score,” SHS coach Scott Kinsaul said. “We didn’t have a field goal in the second half.

“Their (Andalusia’s) defense had a lot to do with it,” he said. “They’re very good at reaching in, and stealing the basketball to cause turn overs.”

The Lady Bulldogs got off to a slow start in the first half, only scoring five points in the first period to trail 10-5 to their rivals.

Straughn then went on to outscore AHS 7-6 in the second period to take a 17-11 lead at half time.

“We just weren’t playing real aggressive,” AHS coach Bennie Shellhouse said about the first half. “Straughn did a good job of controlling the tempo.

“They controlled the tempo, and we got into a little foul trouble,” he said. “Struaghn did a great job with its game plan.

“We came out in the second half and put a little more pressure on the ball, and even at half court sets I’d let them throw it in a little more,” he said.

Barnes then found Tyleshia Malcolm on transition for an easy lay up to start a quick 6-0 run with less than a minute in the third period to help the Lady Bulldogs take a 23-18 lead going into the fourth period.

Straughn’s Brittany Driver scored the Lady Tigers’ (12-2, 0-1 in Class 4A, Area 3) final point of the second half on the back-end of a pair of free throws at the tail-end of the fourth period.

Andalusia sealed the win after a 9-0 run was ended with a lay up by Alexis Horton on transition.

The Lady Bulldogs’ defensive effort in the second half was led by Malcolm, Shi’Amber Townsend and Barnes.

Malcolm had eight rebounds, three blocks and six steals for the Lady Bulldogs.

Shellhouse gave a lot of credit to Malcolm for her performance on the floor.

“She got her hands on seven deflections and seven steals,” he said. “She did a really good job for us, and put us over the top, especially with Shi’Amber in foul trouble and play half of the third and the whole of the second.

“She was the hero of the game,” he said.

Townsend led AHS with 11 rebounds, and Barnes had seven steals.

Horton led the Lady Bulldogs with 16 points, and Barnes chipped in eight points.