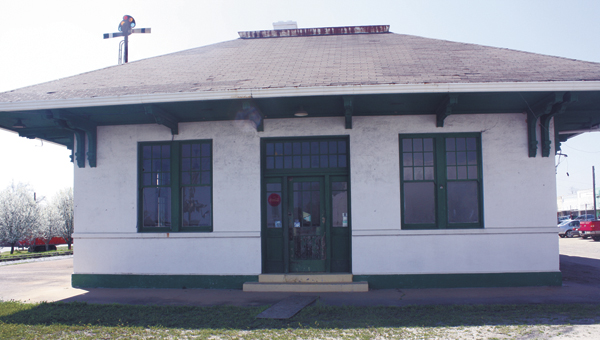 Improvements to the Depot in Opp are also on the list of things the city would like to tackle this year. | FIle photo

The Opp City council has a long “wish list” of projects it hopes to accomplish in 2012, among those are street repair, new bathrooms and looking at purchasing the cotton mill pool, it said Monday night.

Councilman Scotty Short said he’d like to see street resurfacing and patching in District 1, as well as seeing remodeled bathrooms at the baseball field.

“They are in pretty terrible shape,” he said.

“I think we should maybe let each councilman make a list of the worst streets in the district,” he said. “Then, when we do get some money, we can fix the worst streets, no matter where it is.”

In District 4, Councilman Davy Lindsey said he too would like to improve streets.

“On Barnes Street, there are some places that are not in good condition,” Lindsey said. “It needs smoothing out and some maintenance to make it more passable.”

“At night, the lines in the middle of the road are hard to see,” Stewart said. “I’d also like to see what we can do about 84 going out to Andalusia, where 84 enters the bypass. It’s dark. You have to be sure you know where you’re going.

“Maybe we could talk to Covington Electric about putting a light there,” he said.

City Planner Don Childre said it is a tenth of a mile from the last pole to the bypass.

“We’ve repaired a request for DOT, but we never heard anything back,” he said.

The council agreed to seek out all their options.

Also on the list from Rogers was possibly purchasing the old mill’s pool.

“I had Hammer Construction looking at the cotton mill pool,” he said. “It will cost $4,000 to $5,000 to remove the asbestos from there. And we could possibly purchase it for $50,000 – maybe a little cheaper. I was hoping we might could get it, if we could find out ways to pay for it. I’ve had mothers in District 4 call me and they say their pool is crowded.”

Mayor H.D. Edgar said he’d like to get to work on the Depot “right away.”

Zumba classes are being offered from free at Andalusia Health and Fitness. | File photo   More than 30 local... read more