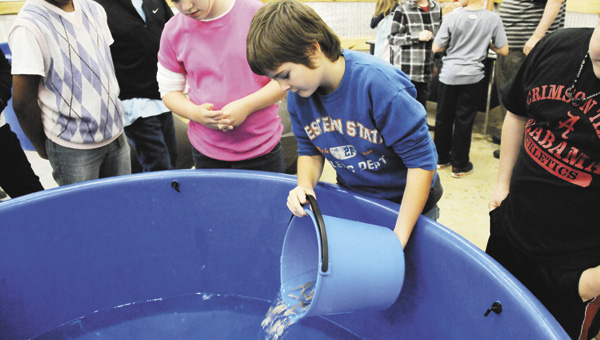 Above: Dylan Leach pours tilapia into a “pond” in the new aquaculture center at Red Level Elementary School as classmates look on. | Andrew Garner/Star-News

Fifth and sixth grade science and aquascience students dispersed the fish in different drums of water.

Additionally, students performed pH and toxic levels of the water.

The PACERS-sponsored aquaculture program was brought to RLES by funds from Sen. Jimmy Holley and Rep. Mike Jones.

The students from Rebecca Powell’s science classes will feed the fish throughout the rest of the year, and will perform science projects to monitor the health of the fish.

On Thursday, the students dispersed 1,600 tilapia and 500 catfish in about four to five big drums of water.

Pickler to perform at rodeo