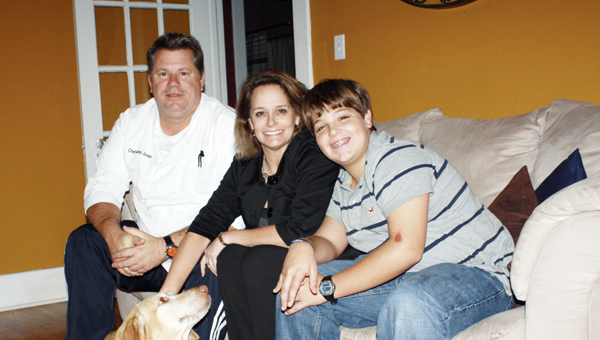 Anyone doubting the power of a newspaper hasn’t heard the story of Chef Vanilla Extract Jones.

Chef, a yellow Labrador belonging to Casey and Cavelle Jones of Andalusia, began his grand adventure when he took advantage of an open gate on Dec. 1.

Frantic about their missing dog, the family took all means necessary to get their dog back, including a classified ad in The Star-News.

“My son left the gate open when he was taking the trash out that day,” Casey Jones said. “As it turns out, a lady from Daphne found her that night and took her to Daphne with her.”

Jones said, the lady, known only as “Dawn,” said she had made multiple attempts to call the police station and the pound to see if anyone had reported a missing yellow lab.

“We reported to both (the police and the pound) and the paper,” Jones said. “I guess she did all that calling before we did this. Either way, she came up here for the holidays, and she called the pound (on Tuesday) and asked if they had any cats to adopt and mentioned that she had found a yellow lab.

“The pound told her there was a guy in town missing a yellow lab, and that she should call the paper because they had all the information,” Jones said. “She talked to Mollie Riley (Star-News classified sales representative). Mollie gave her my number. Then Mollie called me and said she thought a lady had my dog. They texted me a picture, and she had my dog.”

Jones said he eventually met Dawn at The Star-News, where she showed him a video, and he confirmed the dog was definitely Chef.

“Around 7 p.m. (Wednesday), I followed her back to Daphne and got my dog back,” he said. “We’re thrilled to have her back at home with us.”

Riley said that’s the purpose of the classified department.

“We’re glad that we could be a part of bringing a family and their canine back together,” she said. “That’s what classifieds are for, helping provide services to the community, whether it be advertising a lost dog, helping fill a position at a company or helping someone find their dream home. We’re happy to help the members of our community.”

To place a classified ad, call Riley at 222-4157 or email her at mollie.riley@sellbuyalabama.com.