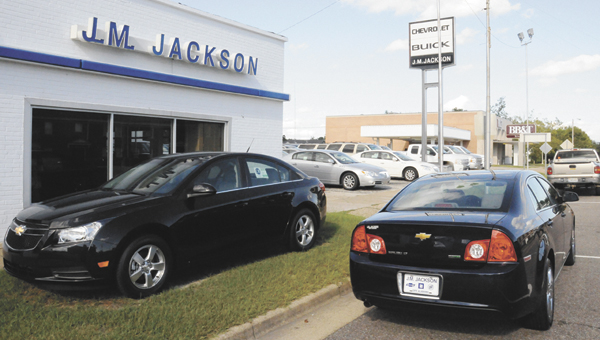 Site work on a $2.5 million automobile dealership in Sanford should be under way in the coming days, officials said Thursday.

Johnny Jackson, owner of JM Jackson Buick-Chevrolet, said the groundbreaking ceremony for the Opp retailer’s new business will be held Jan. 12 at 10 a.m.

“Site work is beginning now,” he said. “We should be seeing some machinery in the next few days. We anticipate it will take probably 60 to 90 days to complete. We hope to start the building – hopefully – in the April timeframe.”

Jackson said architectural plans for the 6-acre site located across from the South Alabama Regional Airport will have some last-minute revisions, and he hopes to have those finalized in the next 45-60 days.

Jackson said the new dealership was a corporate requirement when the company signed its new contract with General Motors.

“We will sell Chevrolet and Buick at this point,” he said. “We hope as we move forward with this project, we can add more. We have requested that GM let us have our Cadillac back and maybe add GMC. We are in the talking stages right now, so we don’t know yet.”

The company had originally intended to relocate to a 7-acre site on the Opp Bypass; however, when GM realigned its dealerships after the government bailout, the local dealership’s territory expanded to include the entire county, and other areas.

Jackson said the new location would allow the dealership to better serve its customers.

“It’s an excellent opportunity for us,” he said. “Locating in the center of the county is critical for us to be able to serve all of our customers. We have customers in parts of Butler, Crenshaw, Coffee and Geneva counties, as well. We have a large area of responsibility. We feel locating centrally is the best thing to do.”

Jackson said the dealership’s entire operation – from sales to service to its used car lot – will move to the new location.

“The decision whether to keep a used car lot in Opp has not be made,” he said. “We’d like to keep a satellite office.”

Jackson said he hopes to be in the new location within eight months.

“Hopefully we’ll be in by the end of this year at the latest,” she said. “But that’s all depending on the weather.”

Jackson said anyone who wishes to attend the groundbreaking is welcome to do so.