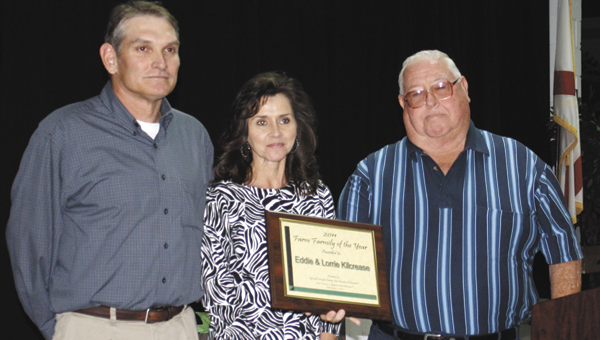 For the first time in many years, there will be an absence of a “time-honored tradition” in Opp – the annual Chamber of Commerce Farmer’s Banquet.

Previously, the Chamber’s selection committee, chaired by Dr. Steve Boothe, has selected a family who has had an impact on the community, and who were, in turn, honored at a special banquet held in February.

Emilee Gage, spokesperson for the Chamber, said Thursday that there would be no farmer’s banquet in 2012.

“We felt that one banquet (Hall of Fame) should be able to cover both events,” she said.

Gage said the two banquets have been held just months apart, and there would be one major difference in incorporating the two.

“There will be no door prizes, like the farmer’s banquet,” she said.

And it’s unclear if there will be a farm family of the year for 2012, but chamber members are working on a solution to honor the importance of farming in the community.

Gage said that Boothe has stepped down from his position as chair of the committee.

“If there happens to be a farm family of the year selected, then they will be honored at the Hall of Fame/membership banquet,” she said.

Traditionally, the farm family of the year has been recognized at the Hall of Fame banquet, though they do not receive the award that night.

Above: Dylan Leach pours tilapia into a “pond” in the new aquaculture center at Red Level Elementary School as classmates look... read more