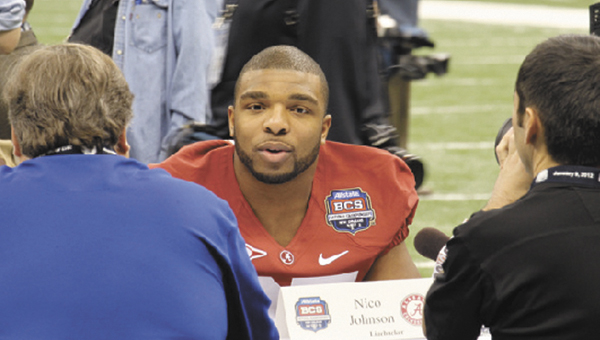 Andalusia native and University of Alabama linebacker Nico Johnson is shown being interviewed at yesterday’s BCS Championship Media Day at the Superdome in New Orleans. Monday will mark Johnson’s second trip to a BCS title game in his three-year career with the Crimson Tide. | Courtesy UA Athletics

Locals are split on how things are going to go down in the “Big Easy” Monday when the Crimson Tide and LSU Tigers meet for a rematch in the 2012 BSC National Championship game.

Tickets for the game have been hard to come by for most fans, and for those lucky enough to score them, very expensive. For most fans, their game experience will be provided by ESPN, who on Thursday, announced that 30 cameras will be used in an attempt to provide every angle possible on every play.

And as one can imagine that the majority of televisions in Covington County will be tuned to the game. On Friday, The Star-News asked area residents to predict the outcome of the game. And whichever way their allegiance went, one thing was certain – residents are absolute in their predictions.

Dorsey Maddox of Andalusia said this game will end much differently than the team’s last meeting in November.

“Alabama is gonna win,” he said. “The coach won’t give this one away. I don’t know what the final number is going to be, but it’ll be a win.”

Tonya Rabren is trading in her orange and blue for a little crimson and white, she said.

Local attorney Rod Sylvester said, “Straight up – Alabama, 24-14. Trent Richardson is going to have his best game of his college career, and I think that’ll make all the difference.”

“The score’s going to be low because of what happened last time,” he said of LSU’s 9-6 overtime win against Alabama.

Will Kellum of Andalusia said Alabama will win because of Coach Nick Saban.

“Alabama is the more dominant program,” he said. “And we have smarter coach. My prediction – 24-10.”

Mike Hall of Andalusia has a different opinion of the game’s outcome.

“I think it’ll be LSU 24-17,” he said. “But before folks get all bent out of shape, let me say, I’m not for them. I’m an Alabama fan. The fact is (LSU has) more talent than anyone in the conference, and depth-wise, LSU has more.”

“35-25 LSU,” he said. “Offensive performance is a big key to the game. LSU has had more time to prepare, and I think they’ll be more touchdowns scored.

“Spence Ware (LSU running back) is the key to the game, because if you have a big game against the Alabama defense, you give up a lot more of the passing game,” Nurse said.

Tickets are now available for the Andalusia Area Chamber of Commerce’s 89th Annual Membership Meeting and Awards Banquet to be... read more