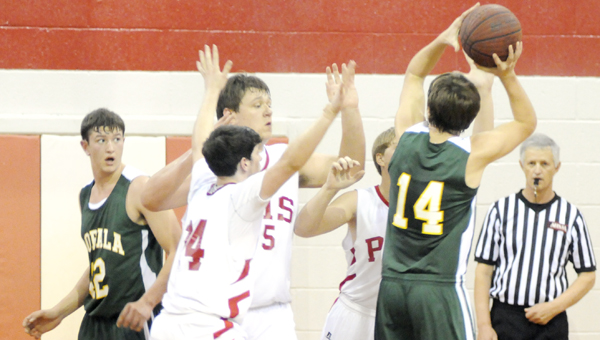 Florala went on a 6-0 run to tie the game in overtime and held on late to beat Pleasant Home 51-49 in area action Friday night at PHS.

“I told the guys if you give it everything you’ve got, then you’ll come out of here with a win,” Allison said. “They did everything they were supposed to do.”

At the end of regulation, the game was at 40-all and how the game got there for the Wildcats was through the back end of a pair of free throws by Colt Jackson with 7.2 seconds left.

Pleasant Home had two 30-second time outs left, and used a full minute to regroup. The Eagles tried for a shot from Jon Cole Chesser from the perimeter, but it failed, sending the game into OT.

PHS had the upper hand in overtime taking a 46-40 lead, but a quick rebound and put back by Florala’s Gavin McCurley and a Desmond Smiley steal and a lay up cut the Eagles’ lead to two points at 46-44.

PHS sent Wildcats’ guard Austin McNeil to the free throw line, where he made two to tie the game and end the run.

“It’s one thing I’ve been preaching to the guys, and it’s ‘you do­n’t let the scoreboard dictate what we’re going to do,'” Allison said. “‘If you play hard, do exactly what I tell you to do, then we’re going to get back in it.’

“That’s exactly what happened,” he said.

The Eagles took a 49-47 lead on the back-end of a pair of free shots from Kaleb Powell after Florala’s Hunter Oswald cut the game back to one at 48-47 with 1 minute remaining.

On the other end of the court, McNeil did a sweet drive move up the middle and made the lay up to tie the game at 49-49.

Pleasant Home took a time out with 10.4 seconds left, and a turnover by Ty Hammett resulted in the go-ahead free-throw shot from McNeil on the other end.

The Wildcats got a throw-in and McCurley was quickly fouled with 0.2 left on the clock.

McCurley made the front-end of a pair and threw up the back-end free throw, and when PHS attempted the long 3-pointer that ended up a miss, McNeil was seen thanking the man above for the win.

When it got down to it, Allison said his team playing “consistently” made all the difference.

“We’re being consistent,” he said. “Even though we get down, we’re still doing the things that we know to do to put us in a position to win.”

Josh O’Neal got a put back and Lance Davis found Powell on the inside to give the Eagles the 6-point lead after the first period.

The Eagles got out to a solid start in the second half, going on a 6-0 run to lead 28-23 after a Davis drive to the basket.

But, the Wildcats didn’t give up and crawled back to take a 29-28 lead on a 3-pointer off a rebound by John Bess.

Bess gave his team a 32-28 edge at the end of the third period when he made three free throws.

The last period was neck and neck from both teams, with Florala eating as much time off the clock, despite a skinny 32-30 lead.

The Wildcats skimmed 1:31 off the ticker and McNeil got a wrap-around to go and FHS took a 34-30 lead.

Florala took a 39-38 lead after a pair of free shots from Jackson. Davis answered with another pair of free throws to put the game at 40-39.

Jackson then hit the back-end of his free throws and the game went into overtime.

McNeil led all Wildcats with 17 points. Bess chipped in 10 points. Oswald and Jackson had seven points each.

Powell had 14 points to lead the Eagles, and Davis had 13 points. O’Neal had eight points. Chesser and Jeffery Slaughter had six points each.

“I think the best-prepared team won the ball game,” PHS coach Jerry Davis said. “Their coach did a great job. They played with a whole lot of patience and played very smart. Their kids won the ball game and we didn’t get it done.”

In B-team action, Pleasant Home’s Austin Harrington nailed a 3-pointer to help edge the Wildcats 22-20 with time running out.