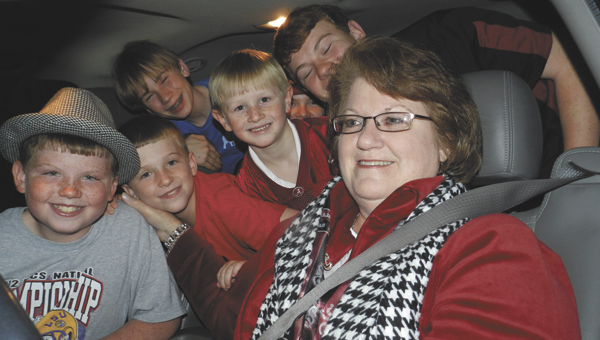 Sue Bass Wilson, right, led an effort to parade around the court square “backward” after Alabama’s national championship win last night. Wilson, who is president of the Covington Historical Society, said locals celebrated the end of World War II with a similar event. There has been at least one New Year’s reverse celebration, as well, according to Norma Moore Jackson.

Count them: Three BCS championships in a row won by teams in the state of Alabama.

Six in a row for the SEC.

And 14 national championships for the University of Alabama. Paint the state crimson, white and crystal.

And did we mention zero? As in points scored by Alabama’s opponent, the much-heralded and previously undefeated LSU, who fell 21-0 in a “home game” in New Orleans?

In Andalusia, fans celebrated by rushing out to buy championship memorabilia. At Hibbett’s Sporting Goods, the doors opened minutes after the game to a line of shoppers that stretched far into the parking lot. The shopping inside was best described as “chaotic.”

Downtown, fans paraded “backward” or clockwise around the square, as opposed to the normal counter-clockwise route. It was Sue Bass Wilson’s idea, and Police Chief Wilbur Wilson, also a ‘Bama fan, agreed Monday afternoon that if the home team won, his officers would direct traffic. A caravan of more than 30 vehicles followed her from WAAO around the square, waving flags and honking their horns.

Rammer jammer, yellow hammer. It’s great to be from Alabama!

Still time to be a college student