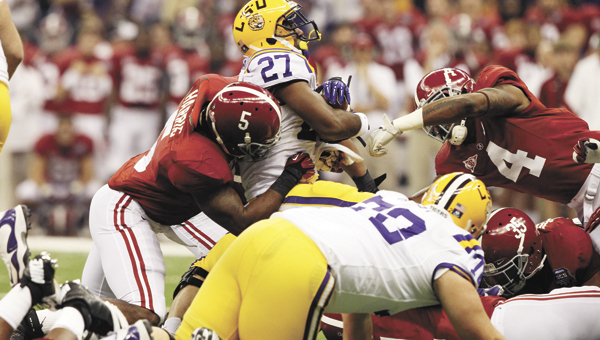 Top-ranked LSU couldn’t get anything going on offense, totaling 92 yards (39 rushing and 53 passing) against the No. 1 defense in the country who helped lift Alabama to a 21-0 win over the Tigers.

In a rematch of the Nov. 5, 2011, overtime loss to the Tigers, the Crimson Tide had to put its faith in Shelley once again, as he made three field goals in the first half and two in the second half.

Alabama’s late touchdown came on the heels of Richardson, who rushed 34 yards for the score with 4:36 left in the fourth quarter. Richardson finished with 96 yards, four yards more than LSU’s total offense.

Offensively, sophomore quarterback AJ McCarron had a spectacular performance for the Crimson Tide.

LSU’s Jordan Jefferson was 11-of-17 for 53 yards and was sacked four times.