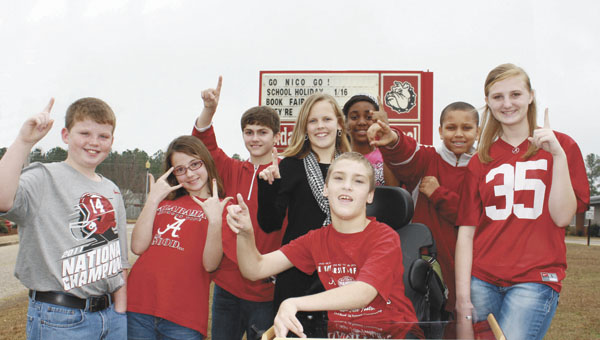 It was a sea of crimson, white and houndstooth Tuesday as students at Andalusia Middle School turned out in their championship team garb after Alabama's BSC win. Teachers said students in the sixth grade class were among the scores of fans waiting in line for Hibbetts to open after the game. Pictured are (in no particular order) RJ Drish, Raylyn Slay, Steadman Glenn, Ayla Delk, Tessa Walker, Taylor Mancil and Zareyah Hines. | Stephanie Nelson/Star-News

Nico Johnson might be as famous as Clay Matthews, Brian Urlacher, Jerry Rice, Troy Aikman and Tom Brady – yet – but he’s as big of a role model as any to Andalusia Middle Schoolers.

AMS coach Tommy Wright said he coached Johnson from T-ball to middle school, and while he was “very athletic,” that’s not his main trait.

“Nico is a great athlete, but what stands out most is his humility and humbleness,” Wright said. “He is always giving his time to the little ones. He always comes back and speaks with them about the importance of right and wrong and making good decisions.”

AMS co-quarterback Sim Bowden said he thought it was “great” that Johnson won his second BCS Championship in the three years he’s played for the Crimson Tide on Monday night.

In a rematch, Alabama defeated LSU 21-0 to win the nation’s title.

Bowden said Johnson showed them you can overcome anything, even when he lost his mother, Mamie, in June of 2010.

“His mom died and he just kept working,” Bowden said. “It makes me think I can accomplish whatever it is as long I try hard.”

R.J. Drish, a sixth grader, has played football for as long as he can remember, and now, thanks to Johnson, he knows

there’s a possibility that he, too, can play college football.

“Football is my sport,” he said. “I don’t relate to other sports. I

think that’s because my dad (Red Level Elementary Principal Rodney Drish) used to be a football coach. I know Nico, and when I saw him bust out of that tunnel, I was like, I know that person. Wow. I’ve had several conversations with him, and I know if he can come from a small town and get all the way to Alabama, then I can, too.”

James Montgomery and Trevor Parker, both members of the football team, said they grew up watching Johnson on the field,

“He’s very competitive,” Parker said. “During the off season he stays in the weight room. He’s shown us that as long as you work hard. You can do whatever you put your mind to.”

“I hope to play college ball,” he said.

“He’s my role model, mainly because he was a starting linebacker at Andalusia High School and I am a linebacker,” Townsend said. “I do my best to model myself after him.”

Relay for Life is just a little more than three months away and local organizers are putting their fundraising efforts... read more