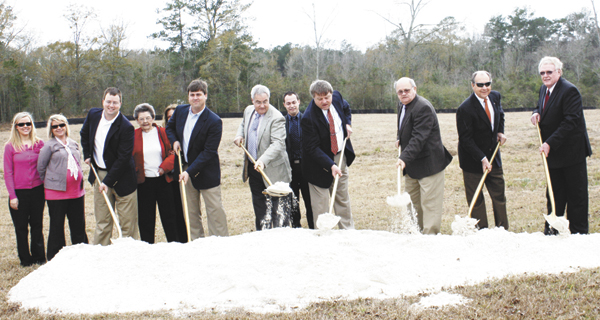 Thursday marked “the start of a new generation” in Sanford as ground was broken on JM Jackson’s new automobile dealership.

The $2.5 million project is expected to bring “work” and “business” to local subcontractors and supply industries, owner Johnny Jackson said.

Enterprise-based Enco Construction has been named the general contractor for the build.

Site work is already under way and is expected to be completed by March or April. Site work is being conducted by Moody Contracting in Opp – the first of many opportunities for local subcontractors, owner Johnny Jackson said.

The new dealership should be ready for business in six to eight months, Jackson said.

Jackson said the new Sanford location was chosen after GM realigned and expanded the dealership’s territory, which now includes all of Covington County and portions of Coffee, Crenshaw, Butler and Geneva counties. The added areas tripled the dealership’s market.

“We felt Sanford was the best place to locate,” he said. “We outgrew our present location years ago, but we had no idea that it would bring us to Sanford.”

Tony Napoleon, zone manager for GM, described the groundbreaking as a “start of a new generation” for JM Jackson.

“(GM has) come through trying times, a restructure and come out of bankruptcy,” he said. “The Jackson family has been in business for 75 years. We, at Chevrolet, celebrated 100 years in 2010.

“They’re not dealers anymore; they’re retailers,” he said. “You may ask as a customer, why we are doing this? It’s all about the ability to serve you. We’re up for the challenge to help Johnny.”

District sales manager Dorian Turcin announced that JM Jackson was the leading seller in his area of 29 dealerships to the crowd of at least 100 who attended the groundbreaking event to show their support.

The new 6-acre site, located across from the South Alabama Regional Airport entrance, is expected to add eight additional employees to the 15 already on staff.

Jackson said the dealership’s entire operation – from sales to service to its used car lot – will move to the new location. He said he also hopes to maintain the current used car lot’s location, but operate it under a different business license.

“We’ll also expand our service department to include tires and alignments, as well as quick lube,” he said. “We’re looking at 12 to 14 service bays.”

“It is a pleasure to welcome JM Jackson to Sanford,” he said. “We are glad this has come to fruition. If would could have picked an industry ourselves, it would have been JM Jackson. It’s a family-owned business, and he’ll give you the best deal on an automobile.”

Jackson also received support from Andalusia and Opp’s mayors and the county commission.

“I would like to congratulate Johnny and family,” Andalusia Mayor Earl Johnson said. “This is a sign of the maturing of our community with Opp and Andalusia coming together. I know that this was a difficult decision for Johnny.”

“We’re going to miss you,” he said. “But we understand it is a business decision. We will continue to support you the way we always have. I honestly think it’s the right decision.”

Opp is set to lose upward of $20,000 a year in tax revenue when the dealership is completed.