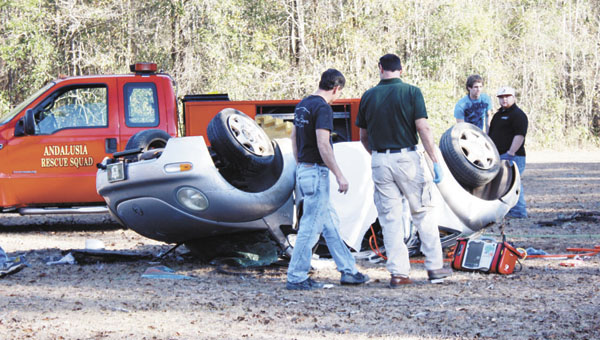 One was dead and three others were injured after this VW Bug flipped Monday. | Kendra Bolling/Star-News

An Andalusia man is dead and three others injured following a one-vehicle accident on Brooklyn Road Monday afternoon.

State Troopers officials confirmed that the driver of a 2000 silver Volkswagen Beetle, Christopher Lamont, 31, of Andlausia, died after the vehicle left the road and overturned near the intersection of Plywood Mill Road around 3 p.m.

At least one was airlifted to an unknown hospital.

The accident remains under investigation by the Alabama State Troopers.

A Straughn Middle School student was injured when she was thrown from her horse Sunday afternoon. Sixteen-year-old Paige Ladd hit... read more