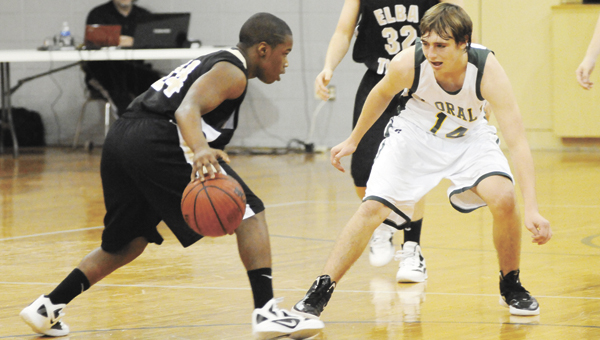 Trailing 11-2 in the first first period, Florala went on a 9-0 run to tie the game at 11-all with Elba and played a tight second half with the Tigers on Saturday night.

However, the Tigers utilized their athleticism and physicality late in the game to beat the Wildcats 57-48 in regular season action.

Before the boys game, the Lady Wildcats fell to the Lady Tigers 64-44.

Elba outscored the Wildcats 11-4 in the second period to take a 22-15 lead at half time.

The Wildcats got within one point of the lead on a floater to go by Desmond Smiley.

In the fourth period, the Wildcats came out swinging with a John Bess 3-pointer.

Colt Jackson then got a lay up on the other end of transition and the Wildcats took their first lead of the game at 38-37.

For the next couple of minutes, the Wildcats stayed close with the Tigers.

Elba pulled away with 5:50 to go on a Martavious Gray 3-pointer to lead 45-40. Gray then answered a missed Florala opportunity on the other end with a jumper to help the Tigers take a 47-40 lead with 5:17 on the clock.

Elba took a 51-42 lead with a sweet inside play, and Florala cut the game back to six points on another Bess 3-pointer.

The Tigers held on as Jake Carnley led with 20 points, and Martavious added 12 points.

Bess led the Wildcats with 13 points.

“I was very proud of our effort throughout the game,” FHS coach Daniel Allison said. “Elba had dominated in every one of their wins this year, and I feel like we gave them a good challenge.

“We had a let down during the second quarter, but came back in the second half and played very well to keep it close,” he said.

Elba’s varsity girls went on a 17-0 run in the first period and went on to beat Florala’s Lady Wildcats 64-44 in regular season action on Saturday night.

Elba’s size and transition play were too much for FHS, who had a better second half, but was outscored 32-27.

The Lady Tigers got a put back to lead 52-35 to put the game way out of reach.

Florala will host area foe Pleasant Home tonight in a rivalry contest. Tip off for the B-team is at 4:30 p.m.