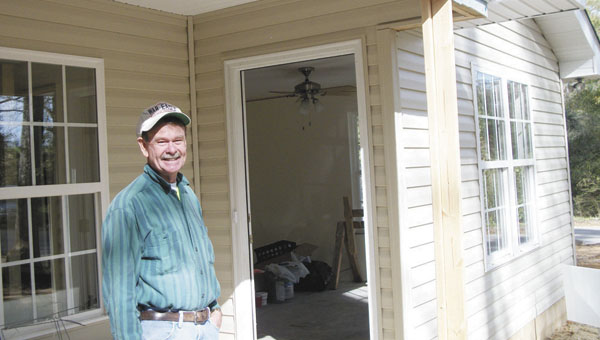 Volunteers at the Florala Habitat for Humanity home are steadily working on the home’s few remaining projects – one of which was made possible through the generosity of two local businesses.

Monday, workers were busy painting trim inside of what will become the new home of Sherrie Stewart and her family.

Chapter director Dale Pancake, who was on site, said the home is “coming along nicely.”

“We’ve had volunteers working when and where they can to get the home finished,” Pancake said. “The cabinets are in, and the vinyl is down. We’ve gotten a coat of paint on the walls, and in some rooms, two coats of paint.

“We still have some work to do on the outside,” he said. “The master gardeners will be coming in to do the landscaping as soon as we’re finished working, and then the sod is laid to give things a nice completed look.”

Pancake said two of the largest contributors of materials and labors were Shaw Industries and Greathouse Floors.

“Shaw donated all the floor covering for the home, and Glen Greathouse at Greathouse Floors for the paint and installing the floor coverings,” he said. “The two just fit together, and the results inside couldn’t be better. There are so many that deserve thanks for working on this project.”

Pancake said once work is completed, organizers will hold a dedication ceremony, and in turn, initiate the closing process on the property.

Previously, Pancake revealed the next build will be held in Andalusia. “We’re trying to get things lined up for that, but we’ve got to finish things in Florala first.

“We still need volunteers, donations and contributions,” he said.

Those wishing to volunteer must be 16 or older, and are asked to “just show up,” but anyone younger than 18 must have a release signed by a parent or legal guardian.