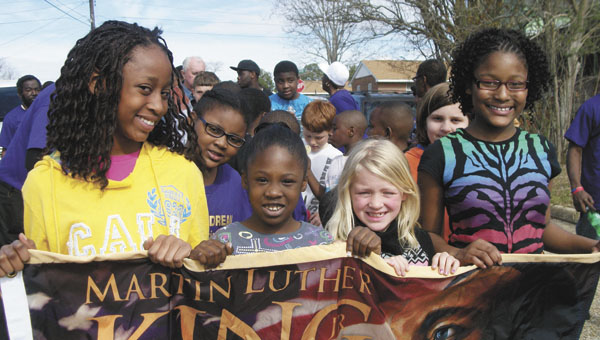 Some 111 people turned out in Opp to celebrate the values Dr. Martin Luther King Jr. represented.

“The battled he fought continues to rage on,” he said. “I’ve heard it said, that 100 years later the negros are not free. Most of the things have happened that Dr. King wanted, but things like teenage pregnancy and crime and violence against each other, we need to leave these things alone.”

Lindsey challenged all present to “make a mark on society.”

“The choices you make determine your tomorrow,” he said. “Whether or not you prepare yourself will determine your future. Let’s build a community. We don’t want to keep these statistics going in the wrong direction. We need to ask ourselves ‘What have we accomplished?’ and ‘How can we better prepare ourselves?”

“Men will be based on content of our character when we are doing what we should,” he said. “Children obey your parents – there is a reason. We need to represent what Dr. King stood for. Unity means a lot.”

Those gathered marched down Main Street to Mullins Street in honor of MLK’s legacy.

Following the march through town, participants were treated to a cookout lunch on the center’s grounds. Prayer was given by the Rev. Nathaniel Belcher.