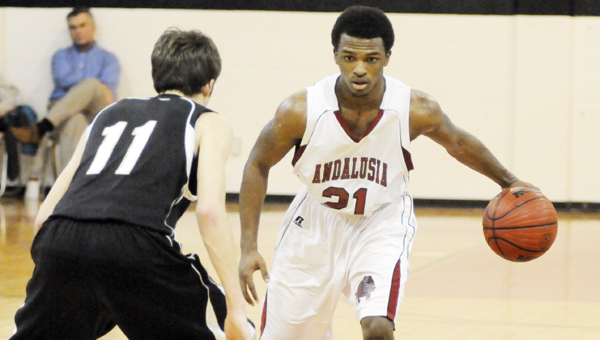 Andalusia and Straughn exhibited a slow and methodical contest on Tuesday night, and the Bulldogs beat the Tigers 44-37 in area action on Richard Roberston’s Court at AHS.

“That’s the way we had to play,” SHS coach Rusty Andrews said about the tempo of the game. “We played the tempo we have to play against Andalusia, but we couldn’t make our inside shots.”

The Bulldogs (13-9, 3-1 in Class 4A, Area 3) and Tigers played it close in the first period. Straughn held an 8-4 lead after a nice inside pass from Griffin Windham to Avery Driver.

Joe Flowers, who led the Bulldogs with 16 points, made a 3-pointer to cut the game back to one point at 8-7 with 4:32 left in the first period.

Flowers then hit another 3-pointer on transition to help AHS take a 10-8 lead, and Andalusia surged to lead 15-10 after the first period.

“We make everything hard (for ourselves),” Robertson said. “Straughn had a good plan. Coach Andrews has done a great job. They don’t need our help.”

At the start of the second period, Flowers hit another tres and Andalusia’s Devante Jackson got a jumper to help the Bulldogs take a 20-10 lead.

JD Driver answered the short run with a 3-pointer, which would be the only points for the Tigers as the Bulldogs took a 22-13 lead at half time.

Straughn didn’t show a complicated defense to Andalusia. The Tigers were in a 2-3 zone to force the Bulldogs to shoot from the outside.

Andalusia matched with pressure and had a better third period to outscore the Tigers 16-9 to lead 38-22 going into the fourth period.

After a Jacard Townsend pass to Sam Byrd, the Bulldogs took a 42-27 lead.

Flowers then made the front-end of a pair of free throws to give Andalusia a 6-point edge, and Townsend made the first of a one-and-one to seal the deal with 3.1 seconds left in the contest.

Byrd had 11 points for Andalusia.

The Bulldogs will visit Ashford on Friday night in area action, while SHS will play in Headland.