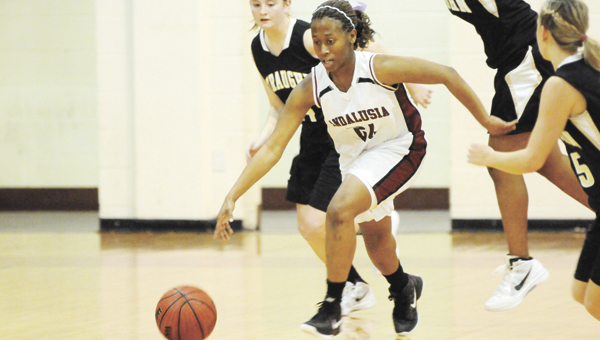 Andalusia’s Lady Bulldogs faced adversity in the second period on a wet Tuesday night, but held on to beat Straughn 63-40 on Richard Robertson’s Court at AHS.

The tenth-ranked Lady Bulldogs took a comfortable 23-6 lead after the first period, but the Lady Tigers roared back in the second and outscored Andalusia 15-4 to trail only by six points at 27-21 at half time.

“We took sections of the game off,” AHS coach Bennie Shellhouse said about the second period. “We want to make sure we continue playing with good pressure and playing smart.

“We went through a spell there where we were up 23-6,” he said. “We just want to make sure we’re more consistent.”

After half time, Andalusia came out and dominated the second half, putting up 27 points compared to Straughn’s 12.

With this victory, the Lady Bulldogs take the outright lead in Class 4A, Area 3, improving to 4-0 in the area, and 18-2 on the season.

This was Andalusia’s 16th straight victory this season.

“We had a great second and third, but unfortunately we had a very bad first and fourth,” SHS coach Scott Kinsaul said. “That’s to their (Andalusia’s) credit. They played well.

“They just seem to turn it on when they need to,” he said. “They can score in a hurry.”

For the Lady Bulldogs to be able to host the area tournament, they need to win one more area ball game. AHS will visit Ashford on Friday night in area play.

Andalusia took its 23-6 lead after the first period with the help of a 10-0 run from the start.

Straughn got on board when Katelyn Kinsaul passed to Paige Taylor on the insde with five minutes left in the first.

The Lady Bulldogs got a little scare when senior guards Alexis Horton and Shi’Amber Townsend collided near center court. Horton suffered a deep thigh bruise and left the game for a short time until late in the second period.

Tyleshia Malcolm scored nine of her 13 points in the first period, and added seven rebounds later in the contest.

Straughn’s 15-4 run in the second period began with a 6-0 run that started with a 3-pointer guard Audrey Driver.

The Lady Tigers trailed 24-14 after an Anjelica Bonham drive to the basket to complete an 8-1 run.

Horton then shot a 3-pointer after an attempted three-point play by the Lady Tigers and Andalusia led 27-16 with 1:30 to go in the first half.

Mariah Bonham added a 3-pointer and Kinsaul blocked a Horton shot with time dwindling to go in the locker room down by six at 27-21 at half time.

In the fourth period, Andalusia guard Alison Daniels was the savior of the team, nailing three of her team’s 10 3-pointers to finish with 16 points for the Lady Bulldogs.

“Alison Daniels had a hot hand in the fourth quarter when we needed it,” Shellhouse said.

Horton led Andalusia with 20 points and 11 assists for a double-double; Townsend had 10 points, eight rebounds and six steals; and Alectricia Barnes had five assists.

The Lady Tigers will visit Headland on Friday night to continue in area action.