An Andalusia woman battling cystic fibrosis and rheumatoid arthritis needs the community’s help in order to have a normal life again.

Twenty-three-year-old Heather Pinckard was diagnosed with cystic fibrosis at birth and was diagnosed a year ago with rheumatoid arthritis. Now she is in need of a gastric stimulator to help her stomach function properly. 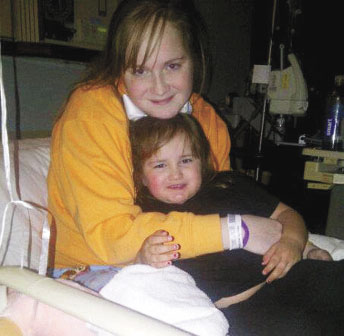 Heather Pinckard, who has cystic fibrosis, is in need of a gastric stimulator in order to help her stomach function properly.

Cystic fibrosis is a disease passed down through families that causes thick, sticky mucus to build up in the lungs, digestive tract, and other areas of the body. It is one of the most common chronic lung diseases in children and young adults. It is a life-threatening disorder. Rheumatoid arthritis (RA) is a long-term disease that leads to inflammation of the joints and surrounding tissues. It can also affect other organs.

“Her stomach only empties 50 percent in a four-hour time period,” her mom, Kay Henderson said. “She vomits all day and is nauseated 24-7.”

The vomiting and nausea has left Pinckard without much energy and frequent hospital stays.

“But now, she’s not even getting that,” Henderson said. “It’s very important that she gets this stimulator. If she doesn’t get it her life will continue to deteriorate. It will help her live a more normal life.”

Pinckard said her body is in need of the stimulator.

“With the gastric stimulator, I’m going to be able to get the nutrition my body needs to function normally,” Pinckard said. “It’s not functioning enough to allow me to get the energy to function (normally). It’s really hard on me because I’m not able to constantly play with my daughter. I can’t chase her and do stuff like that.

“When we have mommy-daughter time, I can take her outside, but I have to sit down, while she plays. I know she needs a mom who can play with her,” she said. “I’m hoping if I’m able to get the stimulator it will increase my stamina and that I can enjoy life with her. My issues are affecting her life. It doesn’t feel good when your daughter wakes up and asks ‘Are you OK?’ It’s not fair to me or her. So without it, I know I am going to go down hill.”

Overall, Pinckard said the stimulate will give her “hope” to have an “active” relationship with her daughter.

“I can’t even carry her because of the lack of nourishment,” she said. “People take for granted how they can carry and walk around with their children. I want to know that I have lived my life to the fullest I can.”

And while the gastric stimulator promises to make Pinckard’s life easier, it comes with a hefty price tag — $13,000, none of which her insurance will cover.

“The doctors and the hospital are willing to eat their cost,” Henderson said. “We are soliciting the company to see if they are willing to donate part of their profits, but we were told to get the money together.”

Residents interested in helping pay for the gastric stimulator are asked to make a donation at Wells Fargo under Debbie Kay Henderson benefit for Heather Pinckard.

The Andalusia City Council Tuesday agreed to abate two pieces of property, and accepted a low bid for work to... read more