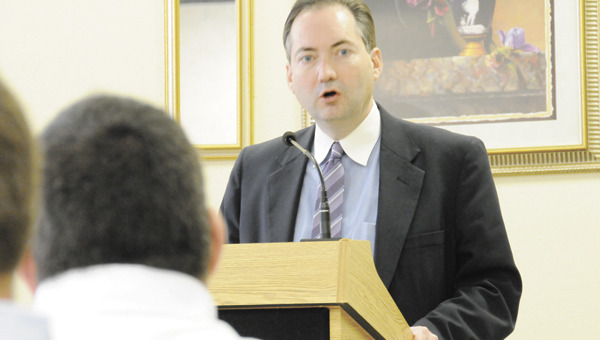 Dunnavant is the author of such notable books as “America’s Quarterback,” “The Missing Ring,” “The Fifty-Year Seduction” and “Coach,” among others and spoke to the local civic club about the “collision of sports and culture” that helped shape him as an author.

He is a native of Athens, Ala., and currently lives near Atlanta. He is the editor-in-chief of Solovox Publishing, where he operates the award-winning online magazines College Football Replay and Crimson Replay.

Dunnavant began his journalism career at The Journal, a weekly paper in Athens in the summer of 1979, where he went to see the publisher for sports-writing job.

“I said you could get a lot more readers if you had a sports section, and ‘oh by the way, I’m the guy to do it,'” Dunnavant said about his interview with The Journal’s publisher. “It’s the greatest job because I had to learn everything for the first time. There was nothing like learning without a net.”

After two decades in the journalism field where he wrote for newspapers all over the country, Dunnavant slid into his current work of writing books and managing online magazines.

He said his interview with Bryant was just as “intimidating” as people said it would be.

“A lot of people I’ve written about through the years who have sunk down in that couch with no springs and looking up at coach Bryant and the intimidation factor — I can vouch for that,” Dunnavant said. “I was there, and know how it was. Fortunately, out of that experience, I got a job with the athletic department (writing for the sports information office), which helped pay my way through school (at the University of Alabama) the first three years.”

“Coach” was written in the 1990s, and Dunnavant recalled a story about Bryant that he said was his favorite.

Bryant was a senior at Alabama in 1935, and didn’t really know what he was going to do with his life, he said.

“He’s rooming with a guy named Young Boozer — now that name should ring strong with you,” Dunnavant said. “His son is high up in state government.

“Young Boozer Sr. was a great half back, and after practice one evening, Mr. Boozer is laying on the top bunk and Paul Bryant is pacing the room and (Bryant was) agitated.

“He had gotten married six months earlier and not told his best friend,” he said.

Dunnavant said Bryant was the “mirror” image of the South and America at that time.

“You think about when he was a young boy growing up in dirt-poor Arkansas,” he said. “He’d have to go out and sell vegetables on Saturdays. He’d remember for the rest of his life what it was like to be teased by those city boys and girls. Those hateful voices had the ability to make him feel small. His whole life was a reaction to that.”

Dunnavant said Starr was drafted in the 17th round of the NFL after Alabama went 0-10 during a regular season.

“He was both not good and unlucky,” Dunnavant said about Starr. “He got drafted because an Alabama coach helped draft him to the Green Bay Packers. In his first year, he made $6,500. He makes the team, survives for three mediocre years and Vince Lombardi comes. The thing I found most interesting about Bart is the power of doubt on a life.

“It connects Bart through his father, and Vince Lombardi through the media,” he said. “He lost his younger brother through freak technis. His father acted as if he’d lost the wrong son. Bart’s father didn’t know how to show love to his son. So, he (Bart’s father) riddled him with doubt. He could’ve gone one way or the other. He could’ve become this angry young man. He didn’t. He had something to prove to his father, who doubted him. For my money, I think that had more impact — the doubt aspect, more on Starr’s success than anything else.”

From there, Dunnavant talked about “The Missing Ring” and how the 1966 Alabama football team dealt with not having the chance to have the opportunity to try and repeat as national champions after winning the title two times in a row.

“Also, to me, it’s a study in that collision of sports and culture of who we were in the ’60s,” Dunnavant said. “The sports part of it is that here’s a team that’s ranked off the brink. A team ranked before scholarship limiatations.”

Another story Dunnavant told was of former Alabama great Kenny Stabler, who stared down the gun as a 16 year old to protect his family from his alcoholic father.

“Kenny has had his own alcohol problems,” Dunnavant said. “When he was on the football field, he had something you couldn’t touch. It is my belief it comes from that place. He didn’t stand there and let something happen to his family that night. He wrestled that gun away from him and saved his family.

“He had to be a man at that point,” he said. “That became a defining moment in his life.”

Other notable Alabama figures Dunnavant spoke about were former player and coach Ray Perkins, and former player Jerry Duncan, and how much each of their stories meant to his purpose of colliding sports with culture as an author.

After his presentation, Dunnavant talked about how Andalusia is fortunate to have native Nico Johnson on the team.

“You’ve got a great, great player from this community,” he said. “I think he has an opportunity to be right up there and coming back and taking that Alabama defense with more leadership. I think that Andalusia has a lot to be proud of. He’s going to be a great one.”

What’s next after area play?