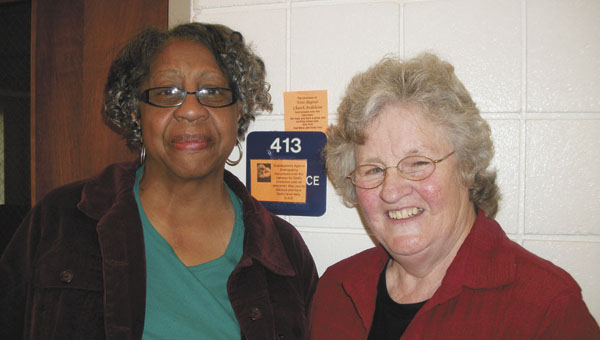 Grandparents Against Deliquency members Linda Lawrence and Betty Gordon pose in front of the AES conference room, one of the many areas features in the group’s recent prayer walk. | Stephanie Nelson/Star-News

And, she knows how important it is that a child feels safe, secure and confident.

Now, she hopes to take that role one step further by providing support to any school-age child in Covington County.

She and a group of dedicated volunteers have established a ministry called Grandparents Against Delinquency, or GAD.

“So many children are living in a single parent home,” Gordon said. “And parents have so much stress and are so caught up with work that they don’t have time to give back to children.

“That’s what grandparents are supposed to do – step in and help carry the load,” she said. “When we were raising our children, someone helped us. Why shouldn’t we give back to our children, grandchildren and other children?”

Gordon said the group hopes to send out the message to area students that they are “not alone, and we’re here praying for their safety and well being everyday.”

“We look to mentor and encourage the children,” she said. “We hope to provide that service for them, because when children see there is someone concerned about them, it gives them hope. We want people to look to us as a support system when they need someone to help them with their child.”

But, it’s not a babysitting service, she said.

“Sometimes children pay attention more when they hear the message coming from someone other than their parent,” she said. “A while back I had the opportunity to become involved with a young girl who needed some direction. I gave her a list of rules to go by like until she brought her grades up, no Facebook, phone or computer. Like restriction. When she did it, she got her privileges back.

“She told me I was just like a probation officer, and a light went off for me,” Gordon said. “What she needed was a support system, someone telling her she could do it – and that’s what this group is all about.”

The group recently completed a prayer walk around each of the Andalusia City School campuses and pledged their assistance to local educators.

She said she felt called to the project.

The group is seeking new members, and Gordon said one doesn’t have to be a grandparent to volunteer.

“We’re looking for anyone that has a love and care for a child to be a partner with us,” she said.

A traffic stop in Montgomery led to the arrest Tuesday of the second suspect in the December kidnapping and robbery... read more