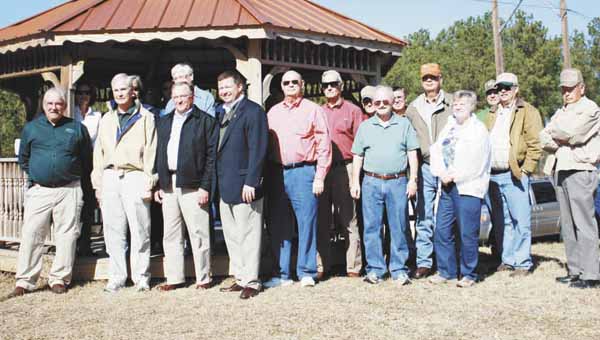 The Opp Trailmasters pose for a picture with Rep. Mike Jones and Deputy Commissioner of Conservation and Natural Resources Curtis Jones at the gazebo at Frank Jackson State Park on Thursday.

Deputy Commissioner of Conservation and Natural Resources Curtis Jones said the park stays completely booked at least 75 percent of the year, and more campsites are needed to help generate more revenue and bring more people to the park.

“We’d like to build eight to 10 additional campsites,” Jones said. “We need to evaluate and see what the return is in this investment. I can’t make any promises that we are going to get these, but we’re certainly going to try our best.

Despite the uncertainty of when and if the campsites would be built, Rep. Mike Jones, R-Andalusia, said it’s a big step from this time last year when it was uncertain which state parks would stay afloat.

Still, Frank Jackson is one of the 10 parks in the state that loses revenue each year.

“It wasn’t designed to be a money maker,” Mike Jones said. “But it doesn’t need to lose a lot of money.”

Curtis Jones said it would be nice for the park to “break even.”

“Campers returns some revenue,” he said.

Despite the need to generate more revenue, both said, “the parks are safe.”

“Right now we are getting ideas no what these parks need,” he said. “They are very important to the area and a big part of the community. The community has demonstrated a big interest in the parks.”

At the Opp location, there are 87 active members of the Trailmasters, who actively work to ensure the upkeep of the grounds and work on projects throughout the year includes miles of nature trails and bridges for the public’s pleasure.

“I can’t stress how much the Trailmasters have done for this park,” Mike Jones said.

“If the other 21 parks could see what a group this strong could do, it would be beneficial,” he said. “I don’t know of any this active.”

“Part of the parks mission is that it’s the people’s park,” Mike Jones said. “It’s really like that here.”

“I want to thank Rep. Jones and Curtis Jones for all they do and for coming down here and listening to what we would like to see happen next here,” said Kenneth Jones, Trailmasters president.

The day’s trip was the first for the deputy commissioner.

“They gave me a review of the park and showed me the walking trails,” he said. “This is a tremendous help to us to see what the park needs next. Organizations like this means that people follow the park. Mike and I talked about doing this because of the finances and the legislature, or the lack of funding. Our parks really got hit last year, but Mike is a big supporter of these parks, and these were two (Frank Jackson and Florala) of the parks we were worried about last year.

“It always helps if you know what you’re talking about,” Curtis Jones said.

Enrollment down, economy up?

LBWCC’s enrollment was down this semester. | File photo   Enrollment at LBW Community College is down nearly 9 percent... read more