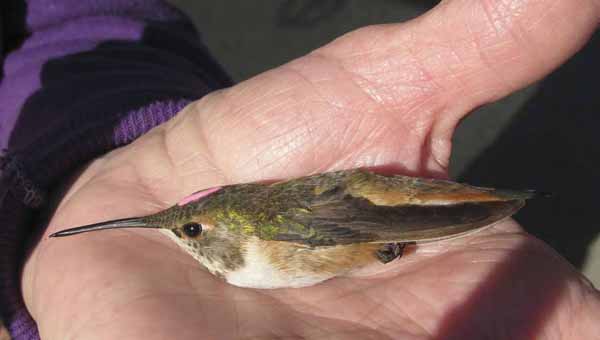 When I mentioned in last week’s column that Fred Bassett, a licensed bird bander, reported that plenty of hummingbirds were visiting south Alabama this winter, I had no idea I would soon see proof of that. I never even dreamed I would hold one in my hand. Then last Saturday morning, my friend Pam Wyche called. She asked if I would like to come and watch Fred band a rufous hummingbird that had been visiting her feeder. She had seen it that morning and the night before.

Within 30 minutes or so, I was at Pam’s house. She kept watching out the window at her feeder as we chatted. So far, the little rufous hadn’t reappeared. When Fred arrived, he placed a cage over the feeder and moved some distance away. There he stood holding a wire attached to the cage, patiently waiting and hoping the bird would return. Pam and I joined him, also watching, and waiting, hoping that it hadn’t left on its way to Mexico or Panama, or wherever hummers winter. We must have been there close to an hour when Fred said, “Don’t move, there it is.” The little bird flew around the cage, and then entered it. Fred released the wire to close the cage. It gave him a merry chase in the cage, trying to escape his grasp. He soon caught it and held it to the feeder so it could draw out the sweet liquid with its long, slim bill. Hummingbird wings move so swiftly that they need plenty of energy to keep them going.

Fred placed the bird in a mesh bag and hung it in his truck while he laid out his banding tools. Then he took the minuscule creature out of the bag and slipped it in a piece of nylon that looked like a footie. He removed a tiny band off a ring and inserted it in the tool he used to place the band on the bird’s leg. He also got out a little bottle of pink liquid to swipe a little mark on the bird’s head. He measured the length of the bird and weighed it, then noted the information in his record book. The rufous was a female that hatched during the summer.

Fred allowed me to shoot pictures and he took some for his records. My crowning moment came when he told me to hold out my hand and he put the hummer in it. I felt its racing heartbeat in my palm. Although I have had hummingbird feeders in my yard for years and enjoyed watching their antics, I had never before held one of those exquisite creatures. What a thrill!

It was a joy to watch Fred work. It seems to give him as much pleasure gently placing one of the birds in a hummingbird lover’s hand as that person experiences. Thanks, Fred! You too, Pam.

I glanced out my kitchen window at the bare limbs of the popcorn tree in the back yard and saw... read more