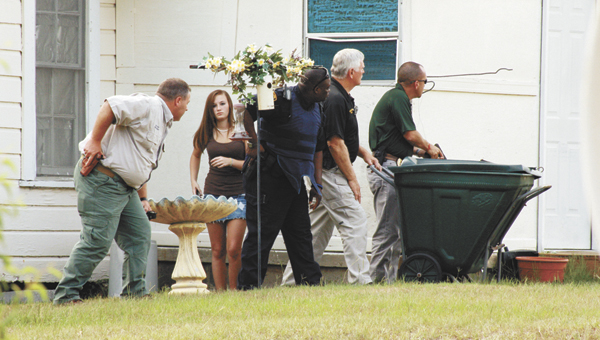 Members of the Andalusia Police Department and Williams’ daughter move closer to him during a standoff last summer.

An Andalusia man has pled guilty and was sentenced to two life sentences for shooting at police officers during a June standoff.

Williams, who shot at the officers when they responded to a domestic disturbance at his Arnold Street home, had two prior felony convictions for theft and possession of a controlled substance.

District Attorney Walt Merrell said the agreement was the second – and most severe – presented to Williams.

“I had previously offered to let him plead guilty to one count with one life sentence,” Merrell said. “He turned it down, so I prepared for trial. I tell everyone that the more I invest in a case, the more I expected to get out of it, so when he told me that he wanted to change his mind, I told him that he would have to plead to two life sentences instead of one.”

Circuit Court Judge Lex Short took the guilty plea while the jury was on recess.

“Mr. Williams was under the influence of alcohol and possibly cocaine, based on letters that he wrote to the victim after he was arrested,” Bowlan said. “This is yet another example of a very violent crime committed by someone who is impaired by mind-altering substances. This case is the perfect example of why we cannot overlook the impact drugs and alcohol have on our community.”

Williams also received a one-year sentence for the domestic violence charge. All prison time is set to be served concurrently.

Workshop to help locals save water

The Alabama Cooperative Extension System will join with the Alabama Clean Water Partnership to host a “Make and Take Rain... read more