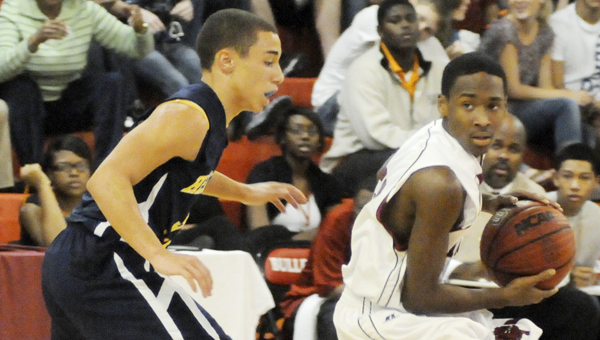 Andalusia’s boys basketball team lost its third out of its last four games last night, falling to Headland 67-53 in area action at AHS.

The Bulldogs trailed from the start after their first offensive possession resulted in a missed trey.

The Rams shot out to a 9-6 lead after a 3-pointer, and never looked back, taking a 20-11 lead after the first period.

With this loss, the Bulldogs fall to 14-11 overall, and 3-3 in Class 4A, Area 3. Andalusia needs Headland to beat Ashford on Friday night to have a chance to match up with Straughn in the first round of the area tournament, which begins on Feb. 7.

If Ashford wins, there will be a coin toss because all four teams in Andalusia’s area will have the same area record.

“Our area is over,” AHS coach Richard Robertson said. “Headland and Ashford will determine what the rest of us will do.

“All we’re going to do now is try to get ready for our next four ball games,” he said. “After the (regular) season is over, we’re going to go to work and see what we can do in the playoffs.”

The Rams led 16-9 in the first period after Dishon McCay’s 3-pointer, and closed a 5-0 run after a Dexter Marsh drive to the bucket.

Headland pulled away in the third period, taking a 47-27 lead with 4:02 thanks to a pair of free throws from McCay.

Andalusia switched to a man-to-man look on defense, and went on a 4-0 run early in the fourth period.

Headland kept answering with shots of its own, and took a 63-45 lead with approximately three minutes remaining.

In the end, the Bulldogs never quit as leading scorer Jacard Townsend drive to the basket twice, with his last being a dunk.

The Bulldogs will visit Northview (Dothan) tomorrow night. Tip off for the B-team is at 4:30 p.m.