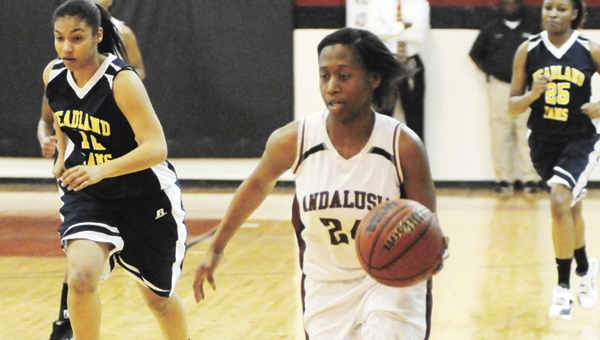 Andalusia’s Alexis Horton scored 25 points in the first half to help lead the Lady Bulldogs to a 63-28 area victory over Headland on Tuesday night at AHS.

With this victory, the Lady Bulldogs have secured the No. 1 seed going into the area tournament, finishing 6-0 in Class 4A, Area 3. Straughn beat Ashford last night to clinch the No. 2 seed.

Horton added three points in the second half to finish with 28 total points for the Lady Bulldogs in the win.

Late in the first half, Horton drained a pair of 3-pointers back-to-back and the Lady Bulldogs led 37-8.

Andalusia finished the first half out on a 4-1 run to lead 41-9 at half time.

The Lady Bulldogs led 28-5 at the end of the first period, thanks to a Shi’Amber Townsend put back.

AHS (20-2) got its 18th straight win of the season, not only with the help from Horton, but from her teammates as well.

Alectricia Barnes had five assists and eight rebounds; Tyleshia Malcolm had eight points and 10 rebounds; Kanisha Johnson had seven rebounds off the bench; and Townsend had five steals and four assists.

AHS took a 7-0 lead early in the first period after a Horton 3-pointer off of a Barnes steal.

Shellhouse said he wanted more “patience” on the offensive side of the ball.

“We took a lot of wild shots — not looking for the open person,” he said.

Andalusia led 12-5 off of a steal and a pass from Barnes to Horton, and the Lady Bulldogs then went on a 16-0 run to close out the period.

AHS outscored the Lady Rams 15-5 in the third period before the second, and third teams played for minutes.