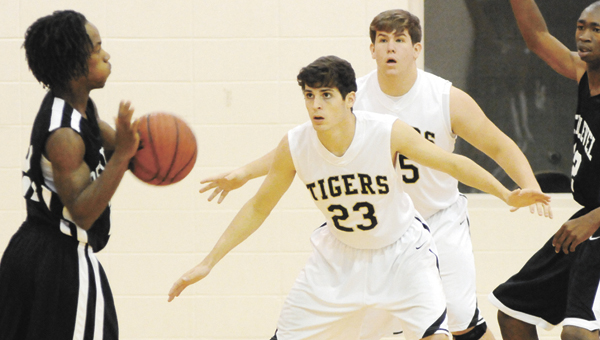 Straughn coach Rusty Andrews said his players have bought into a system that has helped the Tigers find success not only during the regular season, but more importantly — in area play.

On Tuesday night, the Tigers beat Ashford 47-38 to finish their regular season area play 3-3 in Class 4A, Area 3.

Straughn will need Ashford to beat Headland on Friday night to force a coin flip, and maybe be able to either host the area tournament, or travel as far as Andalusia to compete in the tournament.

“It’s so difficult in our area to win on the road,” Andrews said. “In basketball, home court is such an advantage. You’re comfortable in your gym.

“They (the visitors) have to come in and in 10 minutes, try to get accustomed,” he said. “Home court is just such an advantage if you play fundamental basketball.”

And that’s what Andrews said is a big part in the Tigers’ “slow tempo” style of play.

“I think the young men have finally bought into the type of system we have in place to be successful,” he said. “It’s limit your turn overs, take good shots and play good defense.”

When SHS beat Andalusia on Jan. 3, Andrews said it gave the players a big “confidence” boost.

“We’ve never had much success against Andalusia, so for us to beat Andalusia, it gave the young men confidence so that they knew they could compete with people,” he said. “Andalusia is always at the top of the pedestal. That’s what you try to always compare yourself because it’s such a class program. (AHS) Coach (Richard) Robertson does such a good job with them. If you can compete with them, then you know you’re on the right track.”

Straughn senior Avery Driver, who is the Tigers leading scorer and has been since his team’s Christmas tournament, said the wins at home wouldn’t have been possible without the crowd’s participation.

“That’s been probably the biggest factor here was our fans,” Driver said.

Additionally, Driver said following what coach Andrews tells the team to do has been a big part of the Tigers’ success.

“We’re understanding what coach wants us to do, and we’ve got to realize that we have to play every play,” he said. “We’ve got to do what he says to be successful. If we play our slow tempo game, then we’ll be successful.”

Straughn began showing that it can play in the slow tempo game format right after the Christmas tournament, and when area play began, Andrews said.

Since the Andalusia game, the Tigers are 4-4 this season going into tonight’s road contest in Opp.

“We know we have to be a very slow tempo style (team) and limit the number of possessions,” Andrews said. “If we don’t, then we’ll be run out of the gym and that’s happened, too.”

Driver said playing in the slow tempo pace has given the team and him a better idea on how important it is to have possession of the basketball.

“We’re only going to take open shots, and we’ll try to hit lay ups first and then if our shots are open, then we’ll take them,” he said.