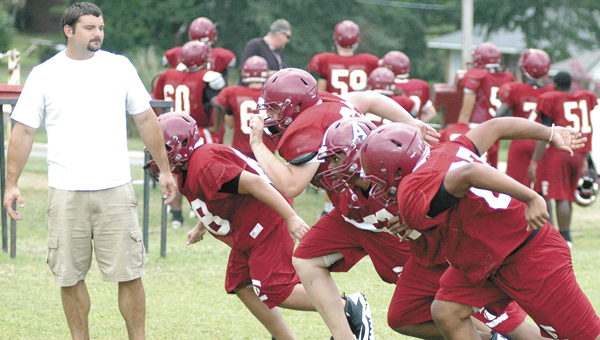 Marcus Taylor said Thursday that it’s truly been a blessing to have coached at Andalusia High School for the past four years as he gears up to take the head football coaching position at Rehobeth High School in Houston County.

Taylor was hired as the new head coach of the Class 5A Rebels by the Houston County Board of Education on Monday night. His last day at AHS will be today.

He said RHS was a “good fit” and it took a while to discern if it was where God wanted him to be.

“It was something I prayed a lot about,” Taylor said. “It was a big move for my family and I, and it’s something I wanted to be sure that’s where God wanted me to be.

“He just seemed to overwhelm me with positives — they’ve got great facilities, they’ve got a great school and a great community,” he said. “I have had job offers before and God had been very clear that you don’t need to go here. There were a lot of people praying about it, too. I just think it’s going to be a good fit.”

While at Andalusia, Taylor served as the offensive coordinator and offensive line coach for the Bulldogs, as well as the head softball coach the past two seasons. Additionally, he was an assistant baseball coach during the 2009 season. Before his four years at AHS, Taylor coached at his alma mater Zion Chapel.

When asked what he’ll take away most from his time at AHS, Taylor said it’s how much he’s gained from the whole coaching staff at the school.

“One of the things I learned here from coach (Brian) Seymore is how to handle the community,” Taylor said. “I’ve watched him, and seen how he’s handled some things. I’ve learned from that.

“I’ve been blessed to be a part of a great coaching staff,” he said. “I’ve learned what a coaching staff is supposed to be like as far as trusting each other, and it being a cohesive unit.”

Taylor also said that it’s been great to be able to build a relationship with the players at AHS, and the “impact that I may have had on those kids, and the impact that they have had on me.”

Taylor said he had the opportunity to meet with his new players on Wednesday, and emphasized that he’s going to bring about an “excitement” in the program.

“It’s one of those things that we’re going to try and go over there and build some excitement,” he said. “Their record hasn’t been that great the last couple of years, and we’re not so much working on record as we are getting kids excited about football, and being proud of it.”

On Monday night when Taylor got the call that he had been hired, he said the first feeling that came to him was that of it being a “blessing.”

“I think most of all, I felt blessed,” he said. “It’s something that I’ve been working toward — it’s been a career goal of mine. To have that completed or happened, it’s kind of a relief and at the same time a nervousness to know how much work you’re going to have to put toward it, so there’s always the mixed emotions.

“It’s exciting at the same time, but you know that you’re going to have to put in more work than you ever have, which is exciting too think about the amount of work and change that’s going to happen.”