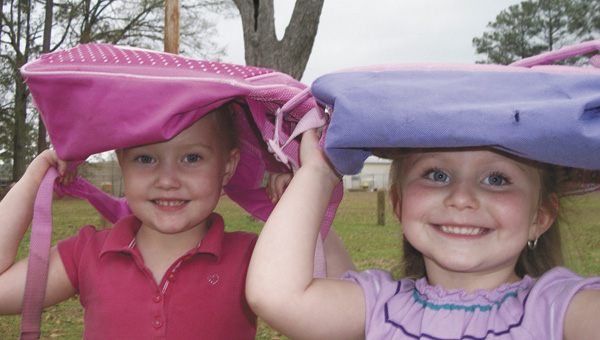 Alexis Owens and Airiana Mayo, students at Bright Beginnings Preschool, work to “keep raindrops from falling” on their heads.

There was no damage left in the wake of Thursday’s severe thunderstorm system, county EMA director Susan Harris said.

The line of storms, which arrived locally just before lunch, prompted area schools and daycares to release students at 1 p.m.

“It was the same front they’d been telling us about for a few days,” Harris said of the system. “It actually died down a little before it got to Covington County, but as soon as it hit, it built back up.

“The good thing was that it moved really quickly northeast, and the only thing it brought this way was rain,” she said. “And even that wasn’t as much as was predicted for our area.”

During the day, the county experienced a tornado watch, a thunderstorm warning and a flashflood watch. Luckily, no damage was reported, Harris said.

“There was a small fender bender over in Opp during the storm, but no one was injured,” she said. “That was the only issue we had.”

“The weather should be nice until at least Tuesday,” she said. “It looks to be a beautiful weekend.”