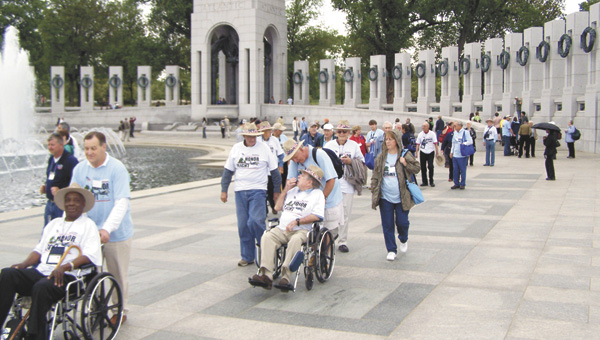 Honor Flight participants tour the grounds on the inaugural trip in 2009. | Stephanie Nelson/Star-News

There will not be a Covington Region Honor Flight this year, officials said Thursday.

Officials credited the decision to a tremendous decrease in participation and ability to raise funding.

“We are trying to plan toward one hopefully next year,” said CRHF board member Greg White. “This past flight, the number of participants was less than anticipated.”

Only 39 veterans and guardians attended the October 2011 flight that took veterans, free of charge, to Washington, D.C., for the day, where they visited sites such as the World War II memorial, Arlington National Cemetery and the Vietnam and Korean memorials.

In 2010, some 115 veterans, guardians, media and medical personnel boarded a chartered 737 from the South Alabama Regional Airport.

During the last trip, the group flew from the Pensacola, Fla., airport.

White said another reason for no flight this year is because “fundraising was a little bit harder last year.”

“We hope that by delaying and pausing for one year, and hopefully make another trip next year.”

White said he hopes that CRHF officials will be able to extend the opportunity to all Korean and Vietnam veterans, as well as any World War II veterans who haven’t participated yet.

“Nothing is set in stone, but we’re working on it,” he said.