Tim Morgan is man who loves coffee – the stronger the better.

And his one place to enjoy a piping hot cup of brew is at Andalusia’s Sugar Rush, where on Thursday, the pastor and founder of Andalusia Bible Church enjoyed his 1,000th cup of coffee. 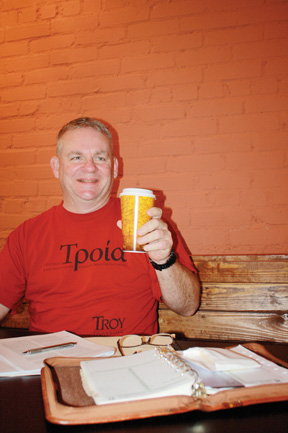 Tim Morgan as he enjoys his 1000th cup of coffee at Sugar Rush Bakery.

Quite a feat, one might say, and Morgan has the shop’s “coffee club” cards to prove it.

“For some reason, I kept the cards, and pretty soon, they started adding up,” Morgan said. “So, we added it up. That’s a lot of coffee.”

He said he never started out to make any kind of record. He just shows up daily to enjoy a 20-ounce cup of his favorite dark roast Columbian coffee, to study and to enjoy the “coffee shop” atmosphere.

“Before I used to drink Starbucks, but we don’t have one of those around here,” he said. “I don’t like caffeine, per se. I just love the taste of coffee – that dark, smoky, strong flavor that has that bite. It’s got to have a bite.”

Storeowner Jason Goldman said the store currently offers 12 varieties of whole coffee beans, which are roasted in Atmore and brought in fresh every two weeks. The beans are available for sale by the pound and half-pound and can be ground to one’s specifications.

“One of the great things about the coffee (at Sugar Rush) is the consistency,” Morgan said. “This cup tastes exactly like the first cup I had here.”