Wildcats had the momentum 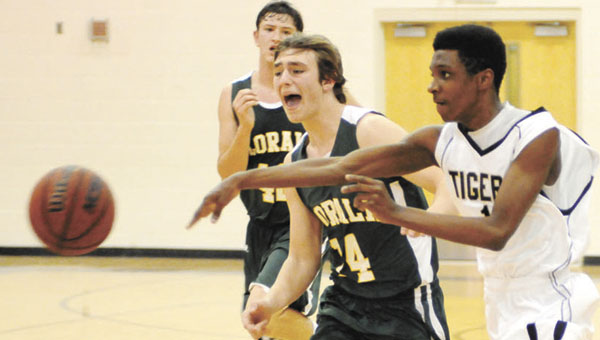 Florala outscored Straughn 17-9 in the fourth period, but the Tigers held on to win 51-44 in regular season action on Friday night at SHS.

What made the fourth period work so well for the Wildcats was their “inside game,” “ball movement” and “demeanor,” FHS coach Daniel Allison said.

“And we stepped up our defensive pressure,” Allison said. “I told them at half time that, ‘if anything, let’s use this as a game to get better for the next game and area. The guys responded, and I told them, ‘look, when you’re down, you’re never out. You can always come back.’

“Our shots started falling. We were hitting our free throws,” he said. “We were hitting the field shots. I’m just proud of our guys’ effort in the second half.” 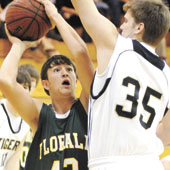 At that point, the Tigers (9-11) were drawing fouls, and FHS got easy buckets.

Florala’s Hunters Oswald, who led the Wildcats (5-17) with 11 points, started a short 4-0 run after a pair of free throws and a lay up on transition after a Straughn turn over.

Straughn’s Avery Driver, who had 15 points, six rebounds and five steals for the Tigers, made two free throws with time dwindling down and Florala’s Austin McNeil drained a lay up with 17.1 seconds to end the scoring for the game.

“We just quit in the fourth quarter,” SHS coach Rusty Andrews said. “We just decided that we didn’t need to play anymore, I guess.

“That’s what I just talked to them about (in the locker room after the game), that you have to learn how to finish the ball game,” he said. “We had a 19-point lead at half time.”

Andrews said the team went back to doing things that’ll kill any sort of good they’ve been doing.

“We just got back into our bad habits — turning the ball over, not making good, crisp cuts on the offensive sets,” he said.

The Tigers took a 7-3 lead in the first period on a JD Driver pass to Brice Scott. Scott finished the game with a game-high 18 points for the Tigers, and added seven rebounds.

Florala’s John Bess hit a jumper at the buzzer at the end of the first period to give the Wildcats a 13-7 deficit.

Straughn scored on two quick possessions and had to take a time out to regroup with a 17-7 lead early in the second period.

The Tigers came back, and roared out to a 23-10 lead after a pair of foul shots from Avery Driver.

Avery got a put back late in the first half to give the Tigers their 32-13 lead at half time.

Brittany Driver scored 17 points, and Jacie Williamson and Audrey Driver had nine points each to lead the Lady Tigers.

SHS got off to a slow start in the first period.

So slow, SHS coach Scott Kinsaul pulled the four starters on the court off and let the second-string play with 53.5 seconds left in the first period.

“I don’t think we played particularly well as we did in the past,” Kinsaul said. “We just couldn’t seem to get things going — our turn overs from our press weren’t working.

“We’ve got to understant that we’ve got to play hard against everybody at anytime,” he said. “I was proud of my second group going in and playing as hard as they could.”

Florala came back to win the third period 8-7 and trailed 26-22 going into the fourth.

During the third period, Straughn’s Anjelica Bonham and Florala’s Paige Irwin collided on the Lady Tigers’ side of the court and hit each other right above the eye socket. Each suffered a deep cut above their eyes — Irwin’s left eye, and Bonham’s right eye. They received stitches after the game and a time table on their return to action was not known when The Star-News went to press on Friday night.

Straughn’s Katelyn Kinsaul drained a 3-pointer with 3:26 left in the game to put the Lady Tigers ahead 42-26 to put the game away for Straughn.

“I was pleased with them, and proud of how we played against this compeition,” FHS coach Phillip Smith said. “It’s a good game to build on. That’s what we’re trying to do right now is get better for our area tournament, and I thought we did that.”